Finally, a car that runs on water! 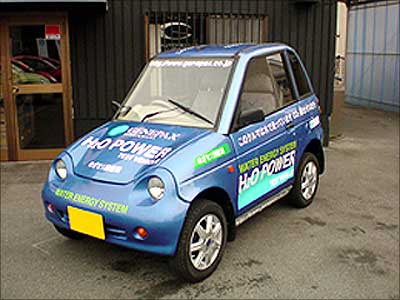 Skyrocketting fuel prices, adulterated fuel, long queues at petrol stations, often unscrupulous attendants out to fleece you -- your cup of woes spills over everytime you need to fill the tank of of your car.

But all this could be history if Genepax -- a Japanese company -- is successful in commercialising its latest innovation: the 'water car.'

Genepax unveiled the car in Osaka, Japan on June 12, saying that a litre of any kind of water would get the engine going for about an hour at a speed of 80 kmph, or 50 mph.

Genepax president Kiyoshi Hirasawa, in a mission statement published on the company's official web site, said, "Our mission is to develop technology and products for efficient production and use of energy. By 'efficient,' we mean ecologically and economically efficient. Ecological and economical energy is our business. Our goal is to create energy that is not taxing on our natural environment."

The water needed to run the car could be tap, rain or sea water, the company clarified.

Once the tank (which is at the rear) of the Genepax car is filled with water, a generator would extract hydrogen from the water using, what the comapny calls, its Water Energy System, or WES, to produce electricity that the car runs on. As opposed to the hybrid cars which emit water, Genepax's invention consumes water.

Whether the car is a commercial success or not remains to be seen, but Genepax said it had applied for a patent and is planning to collaborate with Japanese auto manufacturers.

"Energy made from water," as Hirasawa says, "is not a dream story anymore We hope many people will join us in our challenge to promote the use of our WES, for the better future of the earth," he added in a statement.