Allaying any apprehension on the US moves to curb business process outsourcing to India, the government on Monday told the Rajya Sabha that it would have a limited effect and BPO volumes to India were slated to touch $3.6 billion in value terms during 2004.

Commerce and Industry Minister Kamal Nath told the House during Question Hour that despite the moves towards such restrictions, the BPO business to India was growing at a rate of 40 to 50 per cent annually.

The minister said the government had taken up this issue very seriously with the United States Trade Representative Robert B Zoellick and US Secretary of State Colin Powell.

He said US President George Bush and the Chief of Federal Treasury had also expressed concern over the rising outsourcing to India.

He said as much as 70 per cent of India's BPO business comes from the US and only 2 per cent of the business relating to US government contracts was affected due to a legislation approved in the US Congress.

Source: PTI© Copyright 2021 PTI. All rights reserved. Republication or redistribution of PTI content, including by framing or similar means, is expressly prohibited without the prior written consent.
SHARE THIS STORY
Print this article 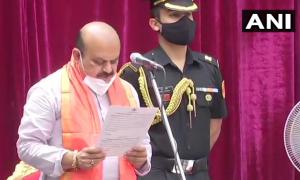