Viswanathan Anand won the Corus chess tournament on superior tie break ahead of world champion Veselin Topalov of Bulgaria after a splendid victory over Boris Gelfand of Israel in the 13th and final round game that concluded in Wijk Aan Zee.

After Topalov was held to a draw by defending champion Peter Leko of Hungary, Anand was under pressure to score a victory over Gelfand and the Indian ace did it in style for his record fifth triumph on Sunday.

Apart from the highly satisfying victory, Anand had another reason to cheer as he will now cross the magical 2800 Elo barrier for the first time in his career.

The Indian ace stands to gain more than 10 Elo rating points from this tournament which will add to his present rating of 2792. After Russians Garry Kasparov, Vladimir Kramnik and Topalov, Anand will be the fourth player in the history of the game to achieve this peak.

The Indian ace did everything right in the event apart from an utterly forgettable loss against old rival Gata Kamsky of United States earlier in the tournament.

Overall, Anand won six games lost one and drew the remaining six. Topalov also achieved the same score with a lone loss against Michael Adams of England but his tie break score fell shorter than Anand.

Since the last Linares tournament in Spain that he won jointly with now-retired Garry Kasparov of Russia, the Bulgarian has been on a real high and was also a runaway winner in last world championship match tournament at San Luis in Argentina.

However, with this event, Topalov's winning streak in the high category events has come to a halt. The third place in the category 19 event was jointly won by Michael Adams of England and Vassily Ivanchuk of Ukraine who both scored 7.5 points apiece. Of the two, the latter was impressive in the final encounter of the 14-player round robin tournament as he beat world's youngest ever Grandmaster and compatriot Sergey Karjakin.

Karjakin and Gelfand had to be content with joint fifth spot on 7 points while Sergei Tiviakov of Holland, world cup winner Levon Aronian of Armenia and Leko finished in a tie for 7-9 places on a fifty percent score. Loek Van Wely of Holland ended 10th on 6 points, Etienne Bacrot of France was next in the standings on 5.5 while twice world junior champion Shakhriyar Mamedyarov of Azerbaijan and Kamsky finished equal 12th on 4.5 points.

The last place was taken by local stalwart Ivan Sokolov who lost his final duel against Aronian.

In the 'B' group being organised simultaneously Alexander Motylev of Russia was declared the winner on a superior tiebreak than Norwegian boy-wonder Magnus Carlsen. It was a dramatic last round in this section as overnight leader Zoltan Almasi of Hungary was beaten by Ivan Cheparinov of Bulgaria that paved the way for Motylev and Carlsen to come up triumphs.

In the last round Carlsen scored over tailender Kateryna Lahno of Ukraine while Motylev had it easy against former world junior girls' champion Koneru Humpy. Despite the loss in the last round, Humpy stands to gain a few important points from this event. Starting as the 13th seed in this 14-players tournament, Humpy finished tied 10th on 6 points.

Anand was back to attacking against the Nazdorf in his pet English attack in the crucial game against Gelfand wherein the Israeli played black.

Gelfand missed a tactical nuance in the middle game and was left defending a slightly worse position for a long time after Anand came up with an incredible exchange sacrifice and did not shy away from entering an end game thereafter.

To Gelfand's credit, he defended mightily, but in the end was helpless against Anand's continuous improvement of his position with deliberate pawn thrusts that left the Israeli defenseless. Gelfand threw in the towel on move 66.

Source: PTI© Copyright 2023 PTI. All rights reserved. Republication or redistribution of PTI content, including by framing or similar means, is expressly prohibited without the prior written consent.
COMMENT
Print this article 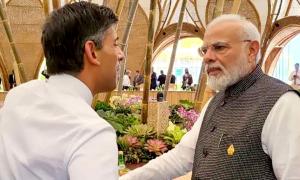 BBC, Modi And The Sunak Factor 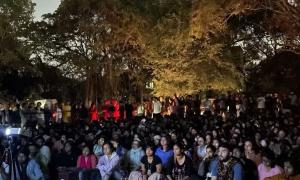