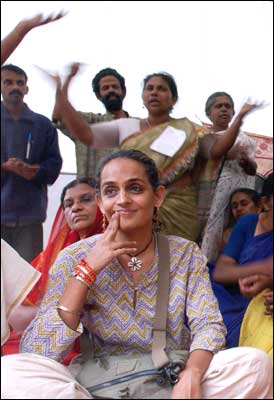 Author and activist Arundhati Roy led an anti-government protest in New Delhi on March 6, on behalf of hundreds of wives of Kerala farmers.

The Booker Prize winner has been espousing the cause of women whose farmer husbands have committed suicide in despair over failed crops. The women are seeking government assistance in having their loans written off.

Thousands of farmers have committed suicide in Kerala's Wyanad district alone following crop failures and subsequent mounting debts since approximately 2001. There have been casualties in other parts of the country too.

A delegation from the All-India Widows and Destitute Women's Movement met Union Minister for Agriculture Sharad Pawar on March 4 in New Delhi, who promised to have a team from the National Bank for Agriculture and Rural Development look into their problems.

Plea in SC seeks ban on parties with religious names

14 charred to death in fire at Jharkhand building