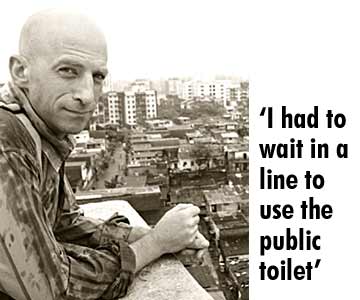 For his book Shadow Cities: A Billion Squatters, A New Urban World (Routledge), author Robert Neuwirth lived in places that many of us strive to avoid  slums, or squatter colonies, of some of the world's largest cities.

From the Rocinha neighborhood of Rio de Janeiro to Kibera in Nairobi and Sanjay Gandhi Nagar a slum in north Mumbai, Neuwirth, an investigative reporter whose work has appeared in The New York Times, Newsday and The Nation, examines how squatters  people whose urban settlements are not legally recognised  build colonies in the face of daunting commercial and political pressure.

While providing its readers a window into the grittier aspects of squatter life, Shadow Cities  which Publishers Weekly called a 'superbly probing book'   takes note of squatter pleasures. Some friends he makes along his journey enjoy what would be considered middle class comforts in much of the developing world.

Ultimately, though, Neuwirth is concerned with what he considers a global problem, which is the inhumane treatment of people who are neither lazy nor thieves, but hardworking and vital components of their economies and cultures. Excerpts from an exclusive interview with Arun Venugopal:

Where do you live and what is your place like?

I live in Brooklyn. It is a normal tenement apartment. Standard New York City issue. Four rooms. No hallways. No doors between the rooms. I have lived here by myself for 15 years. So, not a squatter in New York.

After living in squatter colonies around the world, did you have trouble readjusting to life in New York?

Sure I did. It was wonderful to take a shower. In Mumbai, I lived in a small squatter colony, Sanjay Gandhi Nagar. It is a pretty lucky community, but there are no water taps in the building and I had no water in the room I stayed in. I washed by doing the standard bucket bath so it was quite a pleasure to come back and take a hot shower. Otherwise, I don't think the differences were jarring. You live in conditions you can. The conditions were not so terribly degraded that I felt completely alien.

Is it hard to relate to people's day to day concerns in New York?

People's concerns differ across the world. It gave me a different perspective on issues we fight in the developed world versus issues my squatter friends fight for every day. It is true the family living in comfort in Bandra or Juhu (residential areas in Mumbai) have different concerns than folks living in Dharavi or Sanjay Gandhi Nagar (slums in Mumbai). The differences are equally as huge. Some issues the wealthier communities face seem less relevant to me even now than they did before I embarked on this trip.

What kind of issues?

I cannot give you direct ideas. What was the big issue that got covered in the media  the lady with the vicious dog  it's an issue for people in her building. They are menaced by her dogs, but it pales in comparison to fighting for adequate sanitation, toilets, for things we all take for granted in American society. From that standpoint, I have a lot less patience for some issues that make big news in New York.

Have you brought back any of your squatter lifestyle?

I live frugally and always have. I am not a conspicuous consumer. There weren't major differences between how I lived in Mumbai or in Rio, Nairobi or Istanbul, and how I lived here. There were some differences in the standards that were available in the community: not having water or having a water heater or a private toilet.  But those are conditions imposed from outside.

So are you somewhat adaptable?

I guess. I never knew I was. But having traveled all these years, I felt at home in all the communities. My experience of them  I don't think of them as degraded, horrific, hellish places, rather as homes to people with the same aspirations that I and my neighbours in New York have.Many Indians would flinch at having to use a public toilet on a daily basis. It was a necessity. I had to wait in line in the morning.

Would you have to plan ahead of time?

If it was at rush hour, I would say to myself, 'Okay, I better go now, as I have an appointment at such and such time and I need to use the toilet block. It will be crowded now and I have to go now. I decided I would not squat over the drainage culverts in the neighborhoods, although I could have done that, I suppose, as well.

Why did you make that decision?

I did not feel it was right. People should have toilets and to the extent they have toilets, if they don't have enough, they should have more. My sense of privacy tells me I will use a toilet where I must stand in line, but I will close the door. I did not feel like being out in the open. Maybe over time I would have gotten used to that. But I am not saying it is good to get used to something like that. I don't support that as a necessary style of life.

It is rather degrading to people, particularly to women. You will see men in the daytime using the drainage ditches. The women have to wake up in the middle of the night. Or, at least I assume that, as I never see women doing that. There is an issue of shame that everyone shares.

What was it like to take a bath? You wrote about people bathing outside, the men stripping to their underwear, women dumping water over themselves wearing saris.

(Laughs) It's tough, it's very tough. I avoided it. I would dump buckets of water over myself in my room and take it outside.

How did you do it?

I had a small bucket and a large plastic pan that I used to wash clothes. I would fill my water bucket. I had a 20-liter plastic water container. I would fill the small bucket, would lather up and rinse myself off, standing or crouching. Some do that on the street, some in their home.

Is that something other people also do?

It depends. Some people have drains within their homes. It's easier to do it if you do. I did not have a drain in my room. My landlord had a drain in his home but most often I would carry the bucket downstairs and dump the waste water into the drainage culvert, the channels dug by the  the community. The reason why I bathed inside is that I was already the object of curiosity, being a non-Indian living within the community. For many of the people I was probably the first non-Indian they had met and certainly the first American they had met. I could imagine taking a bath outside and the crowds gathering. It made me a bit uncomfortable. I was gathering crowds, being there. For my ability to blend in, I felt better about staying outside while I bathed.  Otherwise I felt it would become a bit of a freak show. I did not want to disrupt life more than I had to.

Were there any other challenges?

The biggest problem I had was language. I had learned Portuguese to go to Brazil, some Turkish to go to Turkey, a very little bit of Swahili but found most Kenyans could muster their way through English as it's taught in school.  I had assumed that since English was one of the official languages in India, more people would know English. I neglected to learn Hindi. In the community I lived in there were probably 1,500 people, and two spoke English with any degree of fluency.

What were the close relationships you formed? Did that lead to any quarrel?

My best friend was a taxi driver whose father spoke English pretty well. He was aggressive about being friends. He saw it as an opportunity for him to show his knowledge to the rest of the community. He would sometimes show up in my room uninvited and make himself at home. I had issues with that. He was always bothering me about using my mobile phone. We had some issues about that, but in general, no major fights, normal things that friends have.

Did you face tension with neighbors?

I never had issues. By American standards, I'm not rich, but, by standards over there, my money is more than most people earned there. I was honest about it and about things that almost cost the same. An umbrella in Mumbai was around Rs 100 (about $2). In New York, you can buy an umbrella for $3, and that's comparable. But, Rs 100 is incredibly expensive. I could never figure out why umbrellas are the same price there as they are here.

Did you experience crime?

The only run-in with crime was on the train. I was on a Western Railway train and was not paying much attention. As we pulled into Lower Parel station, someone had been eyeing me. As he got off the train, he slipped his hand through the handle of the umbrella and took it with him. He lifted it out of the shoulder bag.

No. It taught me a lesson. I looked around and saw a couple commiserating. In general, people took care of me. I rode the normal commuter rail road and often people would make extra space for me or try to make me comfortable or offer a seat, which I would generally refuse. People were almost protective of me.

You said in your book Mumbai had one of the most progressive policies towards squatters of any big city in the world. How so?

I have to amend that now as there are massive demolitions going on now. They are progressive because squatters prior to January 1, 1995 have some sort of a vested right. That does not mean they cannot be evicted, but many of them must be rehoused. Of course, that does not extend to tenants. If I am a tenant and paying rent, I don't have that vested right. The problem is the cutoff date and the way evictions are handled, the way communities are forced to bring themselves together and negotiate with the city over the lists of people who are supposed to be re-housed. The wave of evictions is troubling. Some 200,000 people have been made homeless. I'm not arguing that folks who occupy a median strip on a highway  I'm not arguing that's a good place to live  but the people are working people. My landlord at Sanjay Gandhi Nagar was a tailor, my neighbor was a policeman, my best friend Raju was a taxi driver. One of my neighbors worked in a downtown hotel. They are part of the economy and have to be dealt with that way.

What is your next project?

I have no idea. Doing the book has brought me closer to an idea about what I would like to do. I like writing about what I would call spontaneous insurgent citizenship. I don't mean like the insurgents in Iraq, but spontaneous movement that challenges the status quo. Squatters are unconsciously bringing into conflict some of the norms the political system has established. I would like to find other issues like that that cross national boundaries, so that I can expose people to ways to look at things.