If you have savoured films like Training Day, Street Kings, We Own the Night and The Departed then a sincere request would be to not let Pride and Glory spoil these for you.

With Pride and Glory, director Gavin O'Connor takes us into the lives of a cop family where Francis Tierney, Sr (Jon Voight) is the Chief of Detectives, his son Ray (Norton) is a detective, and his eldest son Francis (Noah Emmerich) is in charge of the precinct where his son-in-law, Jimmy (Colin Farrell), works. When four officers who work in Francis's house perish in a drug bust, he coaxes son Ray (Norton) out of his leave of absence to investigate the case. During the course of his investigation, Ray finds out shocking facts about the case. Tired and sapped out of confidence, Ray is faced with the toughest decision of his life -- to choose between his loyalty to his family and to the department.

Pride... lacks the cinematic timber and attempts to resuscitate the banal good cop versus bad cop melodrama yet again. With a powerhouse but depreciated starcast, director O'Connor made Pride...ineffably verbose and so moody that you wish you could control the seek time of this blatantly inspired-from-the-80s ho-hum family hodgepodge. O'Connor distinctly follows The Departed route but ends up being nowhere close to the rude, bleak and ferociously entertaining Martin Scorsese artifact. 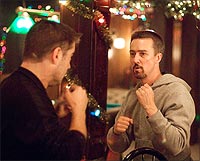 As always, Ed Norton is in fine fettle. He is undoubtedly one of the finest actors and it's a pleasure to watch him all angry, deceived and agitated. But Pride and Glory needs to be erased from his filmography. Colin Farrell is convincing as the volatile son-in-law who will not resign from threatening to burn a baby's face with a smoking hot iron in order to get information. Farrell's fine-textured display of depravity keeps him in the loop of some of the finest actors. Emmerich, dealing with death, sibling rivalry and his wife Abby's (Jennifer Ehle) fatal cancer, forms the linchpin of the story.

Another problem per se is the climax, which is a farcical, fist-fight between Norton and Farrell, followed by an even more laughable finale where the ethnic underclass take matters into their own hands and prophetically murder the bad guy while leaving the good guy (how did they know?) unscathed. Seriously, it wasn't worth my money. Norton seems like the only thing that'll hold this muck together.

Thus, book your tickets for this run-of-the-mill only if you are absurdly fine with the idea of watching your favorite actors reduced to uber-cool cliches.