Why we should applaud Aamir

Not the Khan, the film. Gentlemen, hats off. Ladies, handbags down. On your feet, people, prepare for the ovation. Here's why:

1. Because it's the best directorial debut in ages [the film is directed by debutant Raj Kumar Gupta, who assisted Anurag Kashyap in No Smoking], and quite likely the film of the year. There's more than half of 2008 to follow but it'll take something both special and spectacular to top this awesome little film, and I honestly don't see that happening.

2. Because it explores the Mumbai underbelly with such grit that we can virtually smell the sweat and the biryani, hell, we can feel the blood splash on us as protagonist Aamir (Rajeev Khandelwal) walks helplessly through a little galli and the rhythmic song he hears is punctuated with sounds of the meat cleaver, chopping up brain and bottom with guillotine precision.

3. Because it feels like it could happen to you. This is essentially a thriller about a doctor flying in from London only to find that his family is missing. Not just are they not waiting excitedly at the airport, but the phone at home is ringing answerlessly. Before Aamir can think about what to do, a cellphone is hurled at him, his luggage is scooped off, and he's suddenly following bizarre orders while still sweltering in his Mumbai-unfriendly suit and tie. 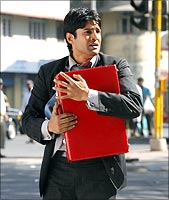 4. Because Alphonse Roy's cinematography deserves a 10 on 10. No kidding. This film perfectly marries the concept of a frantic handheld camera with tight, meticulously mounted extreme close ups, the combination giving it balance. When Aamir runs through an overpeopled haze in a fascinating chase sequence, the camera jostles wildly, as if it's also galloping, breathless and confused, just to keep up. Yet the handheld is never indulged to headache extents, while the tight close shots are steady and assured. Very nice.

5. Because the music by Amit Trivedi is gobsmackingly brilliant. It's been so long since we've had an effective theme tune for a Hindi film, and this one features a hauntingly simple violin solo that squirts in -- with eclectic and varied measure, playing rollercoaster havoc with tempo and rhythm -- just when it should. Awesome. The soundtrack is flawless, jazz tossed in atypical to the whore-and-heat surroundings, and Khusro just when you don't expect it. Buy the CD now.

6. Because the acting is spot-on. Rajeev Khandelwal has an incredibly compelling screen presence, and is consistently so natural that the fourth wall breaks on its own, and your identification with the character is complete. Meanwhile, on the other end of the phone, Gajraj Rao, shot almost completely in the dark, achieves such in-control fundamentalist menace that he makes you shudder, even when stroking an infant's cheeks. The supporting cast all look blessedly unfamiliar and have character dripping from them, especially the hotheaded cabbie.

7. Because director Raj Kumar Gupta has achieved this fantastic nugget of festival-worthy cinema with a really low budget, and while scoffing critics may point to the Filipino film Cavite for inspiration -- a tall order in itself, this is a wholly original Bombay film -- he has shown Aamir to the makers and gotten a no-objection certificate for the same. End the originality/plagiarism debate now; this is our own pikchur, and one we should be proud of. 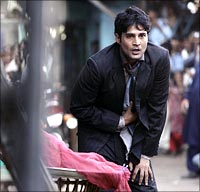 8. Because while I'm itching to take the film apart and dissect bits of it and discuss the subtext, I just can't do that. It's too good to be spoilt, and the best thing for you going in watching this film for the first time is to watch it totally fresh. I will write at length on Aamir a while later, when all of you have seen it, but for now all I can really say about the film is that while it is a thriller, it is also an extremely internal film about character and conflict, while at the same time being a vividly real external experience, giving you a whiff of Mumbai, minus the cliches. There are bits I have issues with -- a dream bit feels like a cheat -- but I can't nitpick much without going into detail. This film rocks, bas.

9. Because it is a first film for the director, the music director, the cinematographer, and the leading man, and that mammoth fact reinstates faith in cinema itself.

10. Because I can't think of a reason not to applaud it, and if you can, tell me now, because I'm watching it in theatres again this weekend.