Sign in  |  Create a Rediffmail account
Rediff.com  » Movies » 'Aamir Khan said I did a fantastic job in Jaane Tu'

'Aamir Khan said I did a fantastic job in Jaane Tu'

Those of you who have seen the film Jaane Tu... Ya Jaane Na could not have missed the guy who played Genelia D'Souza's love interest. If Ayaz Khan looked familiar, it is because he has done more than 100 television commercials and 250 press advertisements!

And now with the film's success, he has become even more visible. "I am getting messages from my well wishers, friends and even from people I do not know, congratulating me on my performance. I am very lucky that people liked my role," says a beaming Ayaz.

Ayaz plays the role of Sushant, Aditi's (Genelia) boyfriend, who is known as Mr Charming amongst his friends. "It was a challenge to portray a character which starts off as a happy-go-lucky character but slowly takes a serious turn developing attributes like possessiveness and some other gray shades," says Ayaz, who is also doing a show on Star One titled Dlil Mill Gayee where he plays a doctor.

"My role in this show is more of a comic character. A doctor who is romantic -- quite different from my character in Jaane Tu," he adds. 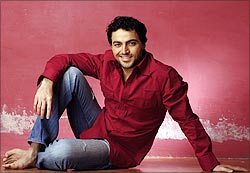 But how did he bag the prized role in Aamir Khan's production?

"When I came to know that Abbas (Tyrewalla) was directing a film, I sought an appointment and went over to meet him. After an initial discussion, we instantly hit it off and he selected me for the role of Sushant. He is a fantastic writer and an excellent director to work with," Ayaz says.

So how was his experience working with a perfectionist like Aamir?

"Before I started shooting for the movie, Aamir briefed me on the role and its significance despite a late entry in the movie. He described his expectations from me and also explained how to act in some scenes. I tried my best to follow his directives and meet his expectations. After the movie got over, we met at the premiere. He patted me on my back and said I did a fantastic job. That, to me, was a big compliment," recollects Ayaz who wants to continue being the guy next door despite his growing star status.