Ladies and gentlemen, boys and girls, children of all ages, we have a winner! No no, the film is indeed ghastly, but it does feature one of the most atrociously graphic and bizarre bits of innuendo in Bollywood history. Boy, trying to tell Girl that her life is boring, likens it to a hot dog. Yes indeed. And instead of saying it lacks relish or mustard, he says -- hold your breath and believe me, this is a literal translation -- 'your life is like a hot dog without a sausage.'

Now, if that's a bit of subversion from a disgruntled scriptwriter, nicely done. Albeit inadvertent, that line is one of the two high points of this ridiculous movie -- the other point being a deftly ingenuous fight-dodge sequence up, down and across a stairway. That's it, and if neither of these unspectacular slices of celluloid have you thrilled, forget this film. There's nothing else on offer.

First off, let's take the Baweja lad. A simian version of Hrithik Roshan, this significantly untalented child tragically does everything in his power to accentuate the similarity with the star. From angular sideburns to v-necked bodyfitting t-shirts to dance moves and even accent replication methodical enough to be the work of a mimic, he tries to be Hrithik.

Except, he can't act. He doesn't look good. He doesn't have screen presence. Alright sure, these things can come about in time, and he is the producer/director's son, so he could get a dozen chances. But yet, he bravely tries to be HR, doing everything short of sticking on a prosthetic thumb, poor sod. That hara-kiri aside, he comes across as a whiney-voiced pansy, and clearly a brat, getting to showboat in Harry Baweja's oh-look directorial effort -- as in, look-my-son-can-drive-fast, look-my-son-can-cycle-fast, look-my-son-can-run-fast... ad nauseaum.

Oh, and Priyanka must have been seriously smitten to sign on this script. Or act this inanely dotty. She's a singularly attractive actress with considerable talent and charisma, but this is a performance calculated to send her into what-was-I-thinking convulsions. I say this gingerly, wishing not to be misunderstood, but her train wreck acting job is far more suited to pornography than actual cinema. No no, she doesn't shed clothes -- far from it (and, on that note, I kinda wish) or look cheap, but she overacts and overpouts in every single scene, far more a 'naive babe in the woods' cliche from a babydoll fantasy than anything with a brain. It's devastatingly bad.

Not that they're alone, these two. Far from it. Nobody in this film can speak a line of dialogue without hamming it up, even as Archana Puran Singh ladles on the Punjabi and Boman Irani plays a mad scientist, which obviously translates to looking like Einstein and acting like Doc Brown from the Back To The Future series. And he's the least objectionable part of the cast.

Seeing the director string out this painfully contrived bit of pap almost makes you wish he had ripped another movie off. Oh, of course it's derivative enough already, but at least he could have had a coherent storyline instead of this hideously hackneyed pile of futuremush. Then again, mini-Hrithik would make a pretty bad Michael J Fox too. 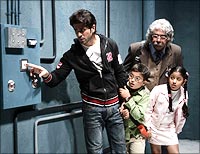 Okay, you say, feeling a little bad for the actors -- you should, really -- but are the much-hyped special effects any good? Oh yes they are. The SFX in Love Story 2050 is pretty darned spectacular, and the fact that an Indian film can now look this impressive is a massive confidence boost for all those now planning to head in sci-fi directions. One wishes, however, that they were equipped with more script and less look-at-me ambition, for that'd lead to this sort of monstrosity: an effects-heavy monster that has no idea how much flash is good for it. Oh, the waste, the waste.

What about the kids, you ask hopefully, won't the children enjoy it, perhaps? Fat chance. While Pri looks hot as a Mortal Kombat character while playing Xbox 360  (in 2050? That's Microsoft development schedule for you, I guess), kids are gonna loathe this. They have DVDs, games and, heck, local TV channels that entertain them more on a daily basis than this. And no, they aren't likely to gush about the talking teddybear who Priyanka routinely 'punishes' with a kick on the backside. (Same frankfurter-lovin' scriptwriter, yeah?)

The story -- since a few may inexplicably, masochistically, still be curious -- is set in Australia in 2008, where after Boy and Girl enjoy a rather pre-teen kinda romance, one of 'em pops it. The other sets off in a time machine to Mumbai in 2050, on a hunt for the -- wait for it -- reincarnated better half.

Nope, no kidding. Apparently, the machine is set only to that date. Of course, on reaching 2050 the fact that the machine can now travel back to four days ago and save the partner doesn't strike anybody -- including mad doctor Boman who, despite being 42 years out of his depth, acts as an oracular authority on all things futuristic, seconds after landing there. Anyway, the reincarnated romantic is found, easily accessed, eventually convinced and all things look set to head back to 2008... except there's an inconsequential masked villain looming over things. Groan.

If this is the Future, that fantastic singer-songwriter Leonard Cohen was right: 'brother, it is murder.'

Oh come on, you're being too mean, a couple of you admonish me. It sounds vaguely interesting and nowhere near as painful as you said, and you're being far too critical of the actors. It could be worth a one-time watch, no?

No, I say, and grin as I lay down my most glorious gambit, my masterstroke: it's three hours twenty minutes long. And the music is by Anu Malik. Do you really have that much time to pass?

I don't know whether to blame Harman or Harry more for this debacle. Harry's clearly trying to give his son the most spectacular launch possible, and is clearly out of his depth in the sci-fi world, but then Junior must have piped up with ideas of things that would look cool. Either way, it's going to take the family a while to live this down.

Because Harman drives this star-vehicle the same way his character drives his father's MG roadster: from zero to write-off in under ten seconds.