SRK, a rage in Germany

By the time I arrived in Berlin this past weekend, Shah Rukh Khan had left town.

"He gave us two and half days," one of the programming directors of the 58th Berlinale International Film Festival told me.  As has been reported in the press in India, Khan was at the festival for German premiere of his Red Chilies Entertainment production Om Shanti Om. The film opens in Germany in March.

But Khan left quite an impression on the press and the festival goers. The day after the premiere at the Kino International, the Berlin press was flooded with the coverage of the opening, including the red carpet, where Khan was seemingly mobbed by fans. And the headlines spoke it all (one does not have to understand German to get a sense of these headlines): "Der Mega-Hyper-Superstar" and "Der Beauch von King Khan sorgt fur Fan-Hysterie" (the lead of this article compared Khan with Brad Pitt and Tom Cruise).

Khan certainly has a big following in Germany and in Europe. In comparison, very few Americans know anything about Khan or for that matter, Bollywood films.

I also met a couple of Khan's fans who had stood in the line for five hours to buy tickets for the premiere of Om Shanti Om.  But the tickets were sold out in five minutes, they told me. They managed to catch the film at another large theatre, Kino Urania.

"Girls came with handbags with Shah Rukh's picture," one fan said. "The audience laughed at the jokes and the songs."

But apart from the Khan hysteria and his announcement that he was set to launch an action adventure project with this production house, India had a rather small presence at this year's Berlinale. There are a couple of shorts, a Tamil film Paruthiveeran, directed by Ameer Sulthan, and a well-attended conversation and screening of experimental films from India. 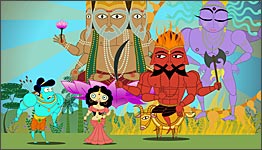 Then there are two films that look at religion and sexuality in India -- and both have a US connection. New York-based filmmaker Parvez Sharma brought his much heralded documentary, A Jihad for Love, after its premiere last fall at the Toronto International Film Festival. Filmed in 12 countries, including India and Pakistan, Sharma's film explores the conflict between Islam and homosexuality. A heart-wrenching film, Jihad looks at the risks homosexuals take in countries like Iran, Egypt, South Africa and Turkey and how despite the political and social pressures, they are able to reconcile their sexuality with their religion.

At the third sold out screening of the film, Sharma introduced the audience to Mazen, an Egyptian homosexual featured in the film, who now lives in Paris. "I believe in Mohammed and I believe in my homosexuality," said Mazen, who was tortured in an Egyptian prison for practicing homosexuality. He added that during his most difficult time in prison, he found comfort in the Quran. 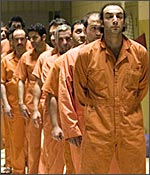 Nina Paley's Sita Sings the Blues is a very different film. For one, this is a brightly animated film and besides, it features songs by a 1920's jazz singer Annette Hanshaw. But in the film, Paley -- who is also from New York -- challenges the Ramayana and explores the Hindu text from the perspective of Sita, a dutiful and devoted wife, who was tested again and again by her husband, Rama, even though by all accounts she was faithful to him.

Paley's film is clever and hilarious. She uses different animation styles -- including one that explores her personal life -- which, in a lot of ways, was parallel to that of Sita. She also uses three narrators (shown in the film as Indonesian puppets), who give modern day interpretation to the Ramayana. This writer is one of the narrators. The other is Manish Acharya, director of Loins of Punjab Presents.

Two films have created a lot of buzz at this festival. Madonna is here with a film -- yes, she has directed it -- Filth And Wisdom. There was a lot of anticipation for the film's premiere on February 13.

Then there is American documentary filmmaker Errol Morris' disturbing Standard Operating Procedure -- a look at the abuses in the Abu Ghriab prison in Iraq. In the film, Morris shows the countless photographs of naked Iraqi prisoners, their American interrogators and interviews most of the key players in the scandal. He makes a methodical case that states that this was a standard operating procedure and the everyone from the top of the American decision-making pyramid was responsible for the heinous act.