The Telugu movie, Homam is another cop-don drama filled with a large dose of violence. It starts of in a somewhat interesting fashion but somehow peters out into the usual kind of fare.

So you can imagine the slackening of pace as the movie progresses. Of course, the cop story has a romantic element interwoven in it which somehow does not gel with the rest of the story.

The story goes like this: Police officer Vishwanath (Pradeep Rawat) trains Mallikarjun to be an under cover cop. His assignment is to infiltrate Jawahar Lal alias Daddy's gang (Mahesh Manjrekar), a big don.

Meanwhile, Daddy, too, finds Chandu, a bright rag-picker who saves him once and gets him to be a cop. Both these boys grow up to be Mallikarjun (Jagapathi Babu) and Chandu (Chekravarthy). Mallik is forced to be part of the bad world of crime. And his mother, who wants him to be a police officer, doesn't even believe he is a cop as he is in mufti and involved with the anti-social elements. She spends her time in hospital battling illness and depression.

Chandu keeps helping Daddy out in crucial junctures even though Mallik tips the cops on Daddy's movements. So the 'twin' stories unfold and the crime drama continues with the police always looking out for ways to nab Daddy who invariably escapes. Then one fine day Daddy comes to know that there is a mole (a cop) in his camp and so do the cops that there is one in their group too. Both the groups don't know who the 'villain' is.

By now you must have found the storyline similar to The Departed. To some extent Homam is a diluted, desi 'remake' of Martin Scorcese's Oscar winner on a simplistic scale. The central thread is taken from the Hollywood film no doubt, but Homam is made into a mish-mash. Homam has its share of romance, item numbers and even unnecessary humour (M S  Narayana and Krishna Bhagwan). 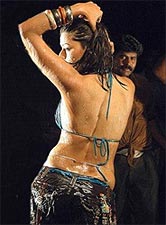 The second half is a tad better than the first but the movie is not the edge-of-the-seat thriller as The Departed. After a point the developments are rather tame and unexciting to watch. The climax may leave the viewer a bit confused initially but later one does get the idea the director Chekravarthy hints at the sequel.

The 'Dawood Ibrahim' factor is brought in and one has to wait and see if the canvas in the sequel touches on international terrorism.

Chekravarthy, as the actor, perhaps fares better than director and writer. The hotchpotch (of The Departed) may not go down well with many. In that context, Homam feels like an 'amateurish' attempt and an assorted medley.

Neither is the slickness (which is kind of present in patches) nor are the dialogues and the story-setting as strong as in The Departed. The romantic interludes in Homam are more of an add-on and do not go well with the narrative.

The girls Mamta Mohandas and newcomer Madhurima have nothing much to do except look glamorous.

On the whole, the film is a watered down hotchpotch of The Departed set in an Indian context but has nothing much new to offer.