From superstar to a political leader

Chiranjeevi, who dominated the Telugu film industry for more than two decades, will be following the footsteps of the legendary N T Rama Rao who floated the Telugu Desam Party on May 28, 1982.

The thespian came to power within nine months of launching the party, ending the monopoly of the Congress in Andhra Pradesh. Without the support of any known political leaders, NTR single handedly campaigned throughout the state (even his son-in-law Chandra Babu Naidu was in the Congress party then) and emerged victorious with a huge majority.

And now, it's Chiranjeevi's turn. At the time when NTR concentrated on his political career and ANR slowly withdrew from films, Chiranjeevi became a hero first and then the biggest superstar the Telugu film industry has ever seen.

Though Chiru, as he is fondly called by his fans belonged to the Kapu Community, he was able to penetrate into interiors of Andhra Pradesh very quickly. With big success behind him, Chiru got huge response from the Telugu film industry which was dominated by producers and distributors belonging to the Kamma Community.

Birth in a village 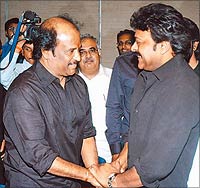 Chiranjeevi was born on August 22, 1955 in Mogalturu, a small village in the coastal district of West Godavari. The eldest of three sons of Anjana Devi and Venkat Rao was named Konidela Siva Shankara Varaprasad. His father worked in the excise department of the state government.

The cinema bug bit Varaprasad quite early and after completing his graduation from Narasapur College, he joined the Adyar Film Institute in Chennai in 1977. He was junior to Rajnikanth at the film training institute and completed his training course in Chennai.

Since the family worshipped God Anjaneya for many years, his mother advised him to get a screen name -- Chiranjeevi. With a new name in place, Chiranjeevi did not have to struggle a lot to get films; he got good breaks quite early in his career. He also worked hard and trained himself in the art of dancing and fighting. Though he first acted in Punadi Raallu, his first film to be released was Pranam Kareedhu in the year 1978.

After he became a hero, he got good offers like Mondighatam directed by Raja Chandra in which his unique style was much appreciated.

Then followed films like Manavoori Pandavalu directed by Bapu (remake of Kannada hit Paduvaaralli Pandavaru directed by Late Puttanna Kangagal) and Intlo Ramayya Veedhilo Krishnaiah directed by Kodi Ramakrishna, which not only strengthened his position as a big star but also brought him lot of laurels.

Within two years of his entry into the film industry, he married Surekha, daughter of well-known comedian Allu Ramalingaiah. 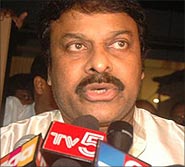 It was Khaidi directed by Kodandarami Reddy that catapulted Chiranjeevi to super stardom. The film was based on the Hollywood film First Blood starring Sylvester Stallone. Khaidi was a blockbuster and also gave him an action hero's image.

Chiranjeevi was not happy doing only action films; he did a variety of roles and showed his prowess in comedies too. His fan following grew bigger with each film.

But that didn't mean he didn't falter now and then. Despite his share of failures, his loyal fans did not desert him. And most of his flop films were able to collect more than what the super hits of other artists did.

Chiranjeevi also had this uncanny ability to bounce back after each failure. Before the release of the films like Hitler and Indra, Chiranjeevi had a list of failures which prompted many people to even write him off. But with Hitler and Indra, he returned with a vengeance. 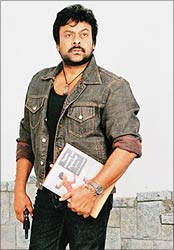 Chiranjeevi won the Nandi award for Best Actor from the state government three times and the Filmfare award seven times. He was conferred with the Padma Bhushan in the year 2006 for his contribution to the cinema industry and also his involvement in social activities.

Chiru's two brothers -- Nagendra Babu and Pavan Kalyan -- are actors too. His only son Ram Charan Teja also debuted as an actor. His eldest daughter Susmitha is married to a Chennai businessman, while younger daughter Srija recently created a furore by running away to get married to Sireesh.

With his decision to enter into politics, Chiru is set to bring back glamour to the state politics, which was once dominated by the demigod of Telugu cinema, NTR.

Will Chiranjeevi able to repeat the NTR magic? Only time will tell.