Khuda Ke Liye: Bold and worth a watch

Umar sari toh kati ishqe butta mein momin. Aakhri waqt mein kya khaq Musalman hogaye? The loose translation of this Urdu couplet by legendary poet Momin Khan would be: All your life you lived in non-Muslim ways. In your old age, how can you become a Muslim?

Khuda Ke Liye, the first Pakistani film to be released in India after 43 years, can be described in these lines.

The film deals with Hussain, a British Muslim of Pakistani origin, who is appalled by the fact that his daughter (Iman Ali) is in love with a white Christian man. Ironic considering he is in a live-in relationship with a British woman.

He brings his daughter to Pakistan and forces her to marry a cousin, so that her offspring will remain Muslim.

The film is a bold attempt by director Shoaib Mansoor about the turmoil in the minds of Muslims about adjusting to the times, while still holding on to their Muslim identity that has been under attack post 9/11. Like, when an honest Pakistani citizen living in America is wrongly detained and how racial discrimination has crept into the American police force, post 9/11. 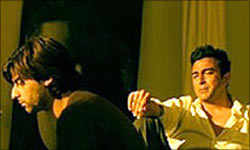 It also asks questions -- whether a Muslim girl can marry a non-Muslim, whether Islam forbids music, or whether keeping a beard and wearing pyjamas is compulsory for Muslims? More importantly, the film asks if Muslim women have the choice to live their lives as they want.

Unfortunately, the film falls short of good performances, except from the lead couple, Shaan and Iman Ali. And even though it is a brave attempt to release a film such as this in a conservative Islamic country like Pakistan, the makers should have paid attention to production values, which are poor.

Naseeruddin Shah, in his brief role, tries to act as the voice of reason, and explains Islam to the audiences. And even though some of it might be too preachy, it is important.

Khuda Ke Liye is a serious film and worth a watch, especially if you are interested in what Islam has to say on various issues. If not, stay away.

The film deserves three stars mostly because it tackles a bold and controversial theme that attacks Islamic fundametalism in a subtle way, and that too, in Pakistan.