If you thought the Hollywood writers' strike has given filmmaker Mira Nair any respite from her round the clock schedule, think again.

"Shantaram is very much on our mind, though we cannot start in February as per the schedule," she said, in a chat soon after a 2-hour event organised by The New York Times for the DVD launch of The Namesake, her highest grossing film in North America.

A Johnny Depp vehicle, Shantaram is a crime and adventure drama set in India, Afghanistan and Germany -- "Don't forget it also has a lot of spirituality," Nair points out -- and was scripted and ready to go, starting with a schedule in Mumbai from February next.

Nair -- also working on the Broadway-bound musical of her film Monsoon Wedding, and having acquired the rights to the novel The Reluctant Fundamentalist -- says the strike mandates that Hollywood writers cannot be asked to make even the slightest alterations when the filming begins.

Whether the film is made in India or America, the rule remains. The screenwriter, Eric Roth -- who won the Best Adapted Screenplay for 1994's Forrest Gump -- is an American. "And you know how it is in the movies," she says with a sigh. "There are always a few last minute changes." 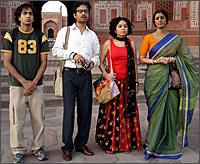 "Johnny Depp has been wanting to make the film for over four years," she says of the project, which, at $100 million, will be her most expensive film ever. The Namesake cost about $7 million, and her costliest, Vanity Fair, about $25 million.

Meanwhile, she continues to be one of America's busiest filmmakers. The Namesake earned an impressive $14.5 million in North America, and some $10 million overseas. And now the DVD -- with a few deleted scenes, and bonuses including conversation with Nair about her craft -- is expected to be one of the hottest DVDs of the season, pegged to earn substantially more than its take from theaters. The film and DVDs were released by Fox Searchlight.

Nair brought her film's stars, Tabu and Irrfan Khan, along for the Times Talks series engagement on Wednesday. The three are also making themselves available to another round of interviews, now that their film is also generating some Oscar buzz. Influential trade publication Variety has put Khan on its list of hot Oscar nomination worthies, singling out his three distinctly different performances in The Namesake, A Mighty Heart, and Darjeeling Limited.

Nair is also doing quite a bit of promotion for AIDS JaaGo, her collection short films on the subject by a mix of directors. Her segment called Migration, she told the audience, shows that AIDS makes no distinction between rich and poor. In the film, a migrant worker in Mumbai has a reckless, one-shot affair with a frustrated wife -- married to a gay man without the courage to stand up to his sexuality. The sexual act hurts the most innocent person in the film, Nair said, adding that she didn't want to give away too much of the plot.

Later she told us that the hot scene between Shiney Ahuja (playing the worker) and Sameera Reddy was one of the most sexually explicit scenes she has ever directed. "The censors passed it," she said. "I am glad they did it, because it is so damn important to the film." 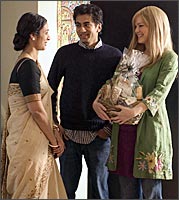 Nair, who lives in New York with her husband and 16-year-old son, also spends a few months in Uganda, where her husband Columbia University anthropology professor Mahmood Mamdani grew up. And then she makes films in India, America and the United Kingdom.

Isn't she overworked, with feet in her domestic world and the movie world?

"I am not complaining at all," she says, with a hearty laugh. "Now haven't we heard the saying, Aaram haram hai? I wish I could be this busy all my life. I don't get overwhelmed, because each project I undertake is well thought of."

And then there are other projects: The Hollywood version of Munna Bhai MBBS, called Gangsta MD, is still in development.

She has been working with Sabrina Dhawan, who wrote the script for Monsoon Wedding, into transforming the successful film into a Broadway musical.

She expects to start Reluctant Fundamentalist at the end of the next year, or in early 2009. "I like working with characters who have more than the black and white shades," she says. "There must be plenty of gray areas, and complexities."

And she found plenty of it in Mohsin Hamid's powerful book, one of the best reviewed books of last year.

"When Mira says she wants to make a film out of my book," Mohsin had said in an interview to us last year, "I know my book is in the hands of a very intuitive director, who also has great integrity."

The Reluctant Fundamentalist is an intriguing and pulse-quickening story of a young Pakistani man telling his life story to a mysterious American stranger. "It is also looking at the dark side of the American Dream, and exploring the aftermath of 9/11," Mohsin said, apart from "the dangerous pull of nostalgia."

Hamid is not the only one to surrender himself completely to the director. Irrfan Khan, who plays a closeted gay man in AIDS JaaGo -- his third film with her -- and Tabu say they respect her enormously, because of her vision and integrity. 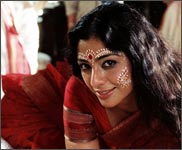 "What is most important for us the artists is that she makes us feel comfortable, shared her vision and insights," Khan -- who began his career with a small part in Nair's Salaam Bombay! over two and half decades ago -- said. "I wonder if I will ever have to say no to her. On the other hand, I wish I could be in every film she is going to make."

At the NYT event, Khan recalled how disappointed he was that Nair changed her mind almost the last minute and told him he would not be doing the major part in Salaam Bombay! He got a consolation prize, he said, a small part. "But people still remember it," he said chuckling.

Nair said she changed her mind because she suddenly felt that Khan, being "tall and well-nourished," did not fit the image of someone who was in the streets.

Khan chuckled even more, saying that at the time he thought he was being pushed out because he was a bad actor. He had just passed out from the National School for Drama in Delhi, and was full of insecurities, he said. He recalled when Nair told him that he was too fit for the part, he thought she was being just kind and wasn't giving him the real reason for un-casting him.

"I have un-cast just about two times in my entire career," Nair said laughing gently. The second one was Rani Mukerji, her choice for the beleaguered immigrant wife. Besides she being a gorgeous actress, Nair has said, the fact that she was also a Bengali -- like the character in Jhumpa Lahiri's novel -- mattered a lot to her. But the actress could not attend the rehearsals, and as a result, Nair had to cast Tabu.

"I went into the film with zero expectations," Tabu told us. "I took it on because I always wanted to work with Mira."

While she is thrilled at the film's success in America, she continued, she was even more thrilled that it had done very good business in India. "The Indian audiences are becoming more and more adventurous," she said. "Thanks to the multiplexes, they get an opportunity to see the more artistic films too. And once they like a film, they will spread the word very fast."

"I took up this film after nearly two years of self-imposed exile from film work," said the pretty actress. "I think it more than made up for those months away from the studio cameras."