The voice behind Shriya in Sivaji

Cinema is an unusual place for a Mechanical Engineering graduate from the BITS, Pilani, to be in but Kanika says she finds the place very interesting. She started her acting career as the heroine in Susie Ganesan's Five Star, a film produced by Mani Ratnam's Madras Talkies. And now she lends her voice to Shriya in the Rajnikanth starrer Sivaji. Earlier, the actress has also dubbed for Sada in Anniyan.

In this interview, Kanika talks to Shobha Warrier about her career in films and how it feels to be part of Sivaji.

How did you end up in films?

It happened after I was crowned Miss Chennai in 2001. I was not even supposed to be participating in the event; I was there only to sing. But when a girl backed out, I was asked to fill in for her. They persuaded me saying that I was tall. I did and won without ay preparation or experience!

I was doing my third year at BITS, Pilani, then. I received a lot of movie offers after that. I did Boys but did not accept any more because my first priority were my studies.

So when did you accept Five Star?

When I came down for my next vacation, I was offered Five Star. They said they would shoot the film during my summer holidays. So I agreed. They changed my name to Kanika. My real name is Vidya.

How did it feel to have a different name?

I was still in college and the change in name really bothered me. At that time, I did not take acting seriously. Kanika was just my film name, otherwise, I was Vidya. But when I took up acting as a full-fledged career, I started liking the name.

Why did you decide to take up acting after passing out from one of the premier institutions in India?

While I was in college, and even after Five Star, I got offers from people like Cheran and P C Sreeram, but at that time, my priority was studies. Having completed my studies in 2003, I thought not all people get a chance to act in movies. Besides, I enjoyed acting.

How did your family react to you acting?

My family was very apprehensive because we had heard a lot of uncomplimentary stuff about the film industry. I was very scared too. But I have been working with some very good people. I don't find any difference between this industry and the IT industry or any other industry. If you carry yourself well, you will be respected. I feel it is a fabulous place to be working in.

How did you adjust to the new environment?

Initially, I felt out of place. I used to ask myself, am I in the wrong place? My friends were applying to various universities abroad and here, I was acting in films. But soon, I started enjoying it. After Five Star, I did a Telugu film with Srikanth.

How did dubbing for Anniyan and Sivaji happen? 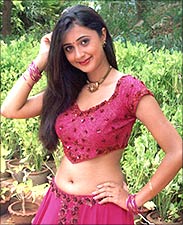 I was working with Madhavan for K S Ravikumar's Ethiri. My role was that of a naughty Brahmin girl. I think Shankar liked my accent in the film. So, he called me for a voice test for Anniyan. Thirty voices were tested when they finally called me to say that they were happy with my accent and modulation. So, I dubbed for Sada in Anniyan.

Because it was Shankar's film, I didn't mind dubbing for it.

The same thing happened for Sivaji too. I was called for a voice test. It was a big movie, and I thought, why not? I went and gave the test. After a week, they called me and said my voice had been selected.

Did the offer to dub come as a surprise to you?

Not even in wildest dreams did I expect to dub for someone else. I only wanted to sing. When I did Thangavettai (a television show), many told me my Tamil pronunciation and voice are good but I never expected someone to ask me to dub!

How was the experience of dubbing for Sivaji?

It was a fabulous experience. I am not authorised to talk anything about the character or the story.

I would say dubbing is like acting inside four walls. Shankar was not there when I dubbed because he was busy shooting. It was his associate Kanthi who guided me.

How do you compare Sada's and Shriya's characters?

Both are Brahmin girls. I think I had more to say in Sivaji. I really enjoyed both because when I did Anniyan, it was the talk of the town, and now, so is Sivaji.

Would you be dubbing in other films too?

I don't look at dubbing as a profession. Since the call came from a big director for a big film, I accepted. Right now, I am doing an interesting film called Pazhassiraja with Mammootty.