JJ Films' Tamil film Ninaithu Ninaithu Parthen has Vikranth and Ashitha in the lead roles. The movie is supposed to have many surprises in store including the second coming of Oru Thalai Ragam fame, Shankar. Malayalam actor Captain Raju who has made a mark in Tamil films too is back after a decade-long hibernation. Reputed surgeon Dr Cherian is said to have played a cameo role in Ninaithu.

In Ninaithu Ninaithu Parthen, the composer has gone on a sentimental journey and created an enjoyable aural treat.

The album opens with Andipatti partinnu, which starts off as a Punjabi bhangra by Sukhvinder Singh. Then Haricharan, Sainthavi and Premji join in and the number changes track and becomes a cocktail of western tune, Tamil rap, gana etc. Lyricist Muthukumar uses movie-associated metaphors and offers some tips to those aspiring for a career in films, all in a lighter vein.

Yaar thantha sapam, a heart-wrenching dirge is up next. Every note is brimming with grief and mounting pain over the death of a loved one. The wrenching number is rendered by Haricharan and supported by Harini Sudhagar's anguished alapana. Muthukumar's lyrics depict the tortured soul's inability to come to terms with the loss, which even turns him away from God. A track with a tremendous impact. 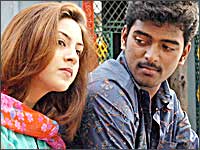 The number is followed by Indiya ithu Indiya, a highly inspiring patriotic piece in praise of the motherland and its unity in diversity, tolerance threshold and peaceful co-existence of 'Raman and Rahman'. Joshua's full-throated rendition does full justice to Muthukumar's power-packed lyrics. The loud chanting of 'Indiya' oozes patriotic fervour.

Ingivale, an easy-flowing love duet is the cream of this album. This well synchronised mixture of western and classical tunes is rendered with feeling by Goutham and the clear-throated Harini Sudhagar. Joshua's parallel track mesmerises and makes you go into rapture, a very deft touch indeed by the composer. Muthukumar's emotive lyrics, the violin improvisations and the swara segment in the interlude lend sheen to the track. The rhythm and tune is brilliantly blended. The number just grows on you.

Up next is an instrumental track which is also the theme music with a line rendered by Joshua and Sunitha Sarathy.

Nana yar ithu is a ballad in semi-classical style about a girl deeply in love. Sadhana Sargam's voice marinated in sugar and honey effortlessly brings out the varied nuances of love, tenderness and longing. The veena interlude adds depth and gives a soothing feel to the track. Muthukumar's lyrics draw a realistic portrait of the changes love brings to the girl's attitude, behavior and life itself. Sadhana has mastered Tamil diction creditably well.

Rhythm quality throughout the album is commendable. Percussion is toned down throughout, except perhaps in the 'Indiya' number.

All in all, a brilliantly packaged album that keeps you hooked.