The story of Jhoom Barabar Jhoom started out as an experience director Shaad Ali had in real life. Shaad further developed it into a love story between two couples. A lot of people contributed to the story, but it was Habib Faisal who structured and penned the screenplay and dialogues.

Habib, who hails from Delhi, was heading towards a career in medicine or engineering. Instead, he got involved with a theatre group in the first year of college. It was there that he was bitten by the writing bug. He wrote, directed and even acted in plays.

After a course in mass communication, he assisted director Pradeep Kishen in a documentary called Electric Moon. After that, he felt the need to study more so he went to the US to get a comprehensive degree in cinema. Later, he worked as a cameraman for NDTV for five years.

The writer, who wrote the screenplays for films like Salaam Namaste, Ta Ra Rum Pum and now Jhoom Barabar Jhoom, met Tigmanshu Dhulia (who directed Haasil) when Jhoom director Shaad was thinking of his next project after Saathiya. Tigmanshu had read some of Habib's work when he was in college and had recommended him to Shaad. Habib penned the first draft of the script but by the time he finished it, Shaad had already zeroed in on his next film, Bunty Aur Babli.

With his script on hold, Habib met Aditya Chopra. 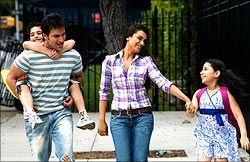 But back to Jhoom.

The story was based on an incident that happened to Shaad. The filmmaker was waiting for his girlfriend at the Delhi airport when the flight got delayed. He then saw a beautiful woman and was in two minds whether he should talk to her. Then he started imagining that this girl might also have a boyfriend.

Shaad did not have the guts at that time to approach the girl, but the incident stayed in his mind. This prompted him to write a story about it with the help of Tigmanshu and Anurag Kashyap.

Habib says that the story was initially set in India. But that changed after Shaad met Aditya Chopra. "They decided to give it a new look by setting the story abroad. Then I came in to picture and developed the screenplay and dialogues," Habib adds.

"In the film, Abhishek plays a Punjabi from India and Bobby plays a Punjabi from Pakistan. They wanted to show the Indo-Pak relationship but they did not want tragedy or melodrama. Plus, they didn't want to show a doomed love story. People have moved on," he says, adding, "So we thought of making a film where people can laugh at themselves and each other without being politically correct -- where emotions matter and not India and Pakistan's issues. Therefore, when this Indian meets a Pakistani girl, they are fascinated by each other and not their countries.

"Then there is this whole diaspora thing," Habib continues. "Films like The Namesake and East is East show people struggling to cope with the change between life in the East and that of the West. These are all important films and I'm not belittling them but for me, when a person travels abroad, it's a time for celebration.

"Yes, there are identity conflicts but we have that here too. We have Hindu and Muslim conflicts and then we have the conflict between upper cast and the dalits. We have many conflicts so the question is if we want to dwell only on the tragedies. Thus, Jhoom celebrates a positive attitude. They may not be from that country but they have integrated themselves and have gone one step further. If this film makes you forget your boundaries, then it has achieved its goal," Habib concludes. 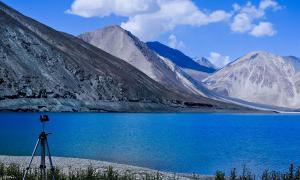 Preity: You'll see a mad streak in me