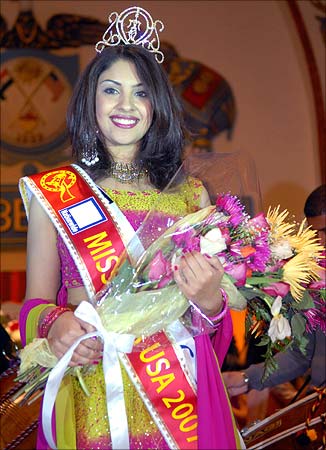 The event, running in its 26th year, was organised by New York-based Indian Festival Committee, headed by Dharmatma Saran, founder and the chief organiser of the pageant, in association with Royal Albert's Palace.

Richa, 21, is in her final year at the Michigan State University majoring in Dietetics and Nutrition and enjoys dance, music and movies.

She also bagged the title of Miss Photogenic, and was crowned by the outgoing queen, Ayushka Singh.

Richa will represent USA in the 17th Annual Miss India Worldwide Pageant, also organised by IFC, to be held on February 23, in Johannesburg, South Africa.

Neha Multani, 22, of New York and Nisha Palvia, 18, of Georgia were respectively declared first and second runner up among 24 contestants from various parts of the country, in the gala event attended by over 600 people.