Sign in  |  Create a Rediffmail account
Rediff.com  » Movies » Daniel Craig vows to bare all in next Bond film

Daniel Craig vows to bare all in next Bond film 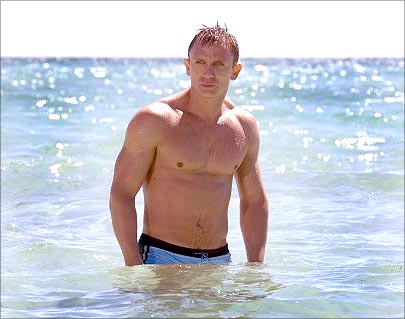 Female James Bond fans are in for a treat as actor Daniel Craig has sworn to go nude in his next Bond movie.

The Casino Royale star will be reprising his role in the next Bond movie, currently called Bond 22, and has vowed to "go totally nude" in it, saying that it is only fair on the girls.

"I'd go totally nude. I've got nothing to hide, and after all, we ask the girls to reveal almost all, so why not the men?" The Sun quoted him as saying.

The ladies have already been given a preview of what is to come, in Casino Royale, where the blonde 29-year-old emerged from the sea in tight blue swimming trunks.

However he found that the infamous scene has made him nervous, especially with the attention it got.

"Did I know the trunk thing would be such a big deal?" he said

"Yeah. I saw it on a huge billboard in Hollywood and people were screaming. It did make me feel rather nervous," he concluded.