A widespread epidemic found wings on the internet, when it was announced that a Hollywood studio would produce the sequel to the independent cult classic, neo-gritty zombie thriller, 28 Days Later (director, Danny Boyle).

But, when one watches 28 Weeks Later, the fears of the film being 'Hollywooded' are put to rest. Juan Carlos Fresnadillo's, who earlier directed the thriller Intacto takes charge from the word go and though not quite Red-Bull revitalising as its predecessor, it is an infectious follow-up to its cult sci-fi predecessor 28 Days Later.

The film opens with the prologue in the countryside manor where the first film left off. Don and Alice (Robert Carlyle and Catherine McCormack) are now married, snuggled comfortably in the British countryside in the aftermath of the infamous disaster that gave most British citizens a raging bloodlust combined with a voracious appetite for human flesh. Along with a few other survivors, the sanctity in the countryside is almost believable.

And then, out of nowhere there is an attack.

28 Weeks Later, Don is reunited with his children (Mackintosh Muggleton and Imogen Poots) and remorseful for fleeing the zombie attack and not so heroically leaving his wife behind in the process.

He is now in a post-apocalyptic London, where the zombies have all died of starvation, and a NATO force, led by the US Army, has carved out a 'Green Zone' that has completely cleaned London from scars of the past and all signs of the raging biohazard. About 15,000 refugees are welcomed back to repopulate the vacant British Isles, including Carlyle's two children.

But, the children carry a deadly secret. 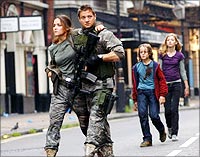 Once the premise is set up and the rules are laid down, 28 Weeks Later charges at you with gory bloodlust, infecting the audiences with hardcore attacks, chases, escapes and a whole lot of bloody kills.

As the film progresses, we are thrown into unexpected twists, turns and cautiously creepy intervals of disturbing silence. As with the prequel, this one too makes effortless use of the shaky, grainy camera movements that throw us bang in the middle of the action, and involve us beyond our darkest imagination.

As far as performances and characters go, we don't really see enough of them to form a bond, and when they are marked for the slaughterhouse in brutal and bloody ways, we really don't care.

But, then again, this is a drama about relationships.

For director Juan Carlos Fresnadillo, who wrote the film with three other credited writers, this sequel all about the body count, the blood fest and enjoying the subliminal potshots at US foreign occupation.

So to answer the most obvious question: No, the sequel is not better than the original. But it's definitely one hell of an effort, that will definitely leave fans of the genre, creatively contaminated and salivating for the final chapter in the trilogy, 28 Months Later.