Mutants aren't what they used to be

I love the X-Men, but let's keep that out of this. Let's not assume audiences heading to The Last Stand are folks who know their Dark Phoenix story arc inside out, and lynch the director for any changes made to the pristine comic book saga. Let's treat this like *deep breath* just another big summer action film.

It was always going to be an extremely uphill battle. Bryan Singer (The Usual Suspects) directed the first two films of the X-Men trilogy, delighting fanboys and thrilling comic-virgins around the world. Not to mention critics. X2 is hailed by many as the finest comic book film -- ever. (I personally don't agree, but it comes darned close) But, fanboy to the core, he couldn't pass up directing Superman. Which is when Brett Ratner (Rush Hour, After The Sunset) stepped in and geeks around the world went livid.

How has he done? To be fair, Ratner's tried rather valiantly. He hasn't gone overboard, has stuck to the basics, and thrown in frantically paced action with every mutant turn. He hasn't changed too much, and this we're all doubtless grateful for. Now, if only he were a good enough director.

The script is extremely ambitious. Set in, we're informed, the 'not-so-distant' future, The Last Stand explores a world where there is a 'cure' for mutants, a miracle drug that takes away the aberrations and makes them normal. As both destructive (Magneto's rebels) and creative (Professor Xavier's X-Men) streams of mutants believe that theirs is a higher species  homo superior versus our homo sapiens  this is a cry for war. The government is realistically ineffectual as mutants battle to stop the 'cure.' 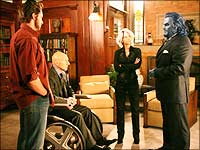 Wonderdrug or not, the X-Men are already knee-deep in crisis. Their bespectacled leader Cyclops (James Marsden) goes missing. They stumble upon his trendy red shades lying near a comatose Jean Grey (Famke Janssen), his lover who died at the end of X2. Professor Xavier (Patrick Stewart) explains that Jean, the most powerful mutant -- boasting extreme telepathic and telekinetic powers -- they know of, must have somehow shielded herself from certain death. He then explains that he had placed mental barriers inside her brain to limit her power, and it now appeared that she had overpowered them to survive. This could potentially bring out a usually untapped 'dark side' called Phoenix.

Wolverine (Hugh Jackman) doesn't like the sound of that, not least because he's always nursed an unfulfilled crush on Jean. The rebel is slowly torn between standing steadfast by the Professor's school and exploring Jean, heading to Magneto's lair or helping Storm (Halle Berry) in her new capacity as leader of the X-Men. It's quite a Herculean emotional struggle for our gruff hero with the adamantium skeleton, but he seems up to it, rushing through the motions  you know, the way actors developing their spinoff projects must.

Sounds like a whole lotta story? Brace yourself, cause that's the first 10 minutes. Okay, maybe 20. The fact is, The Last Stand is packed with intense highs, every scene a crucial key moment and enough narrative steam to fill a mini-series. So this 104-minute film leaves you with no room to breathe or slow down, no time to delve into the backstories of any of the new characters flooding in, and no reaction time. The epic saga passes by in a mad rush, vital climactic moments and even deaths taking place tragically bereft of the glorious build-up they deserve. "She's what? Already?" 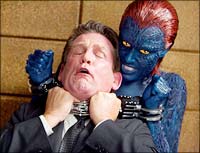 The special effects are, as expected, an improvement over the previous films, but there's more to the X-Men than meets the eye. The story dealt with is complex and Ratner's version, while admittedly high-energy, fails to capture the emotional undercurrent Singer dealt so masterfully with. The comparisons are sadly inevitable, for while Ratner has made a perfectly watchable and mostly entertaining summer blockbuster, his predecessor set the bar too high. An X-Men film emerging eventually forgettable just doesn't cut it anymore.

X-Degrees: A Flash-based who's who

Comic book movies are all about the references. While aiming to take a set of memorable characters beyond an established fanbase and towards a larger mainstream audience, the films must toss in loyal in-jokes and references to the originals, to the texts, to off-screen characters and other story arcs  the true believers must be kept satisfied. Ratner admirably and doggedly tries to pander to the X-geeks, throwing in little asides and keeping the obligatory Stan Lee cameo early in the film. But there's a devastating lack of subtlety. There are lines with great potential, but Marsden and Grammer and Berry all seem to be taking their melodrama far too seriously.

The director, on the other hand, doesn't. Focussing his energies primarily on magnetically twisting gigantic bridges and making attractive blue women morph into aging Presidents, Ratner loses focus of the fact that he's dealing with a potentially superb story. The X-Men aren't just a bunch of freaks, they're a scathing commentary on social divide, tackling issues like racism (Prof X is modelled on Martin Luther King Jr and Magneto on the radical Malcolm X), ethnic diversity, religion and subversion. There is an allusion to anti-Semitism as well, with Magneto referring to his days at Auschwitz. But Ratner lingers not at the deep core, choosing to skim synthetically over to the next eye-popping effect.

Sir Ian McKellen is the finest thing in the film, and Patrick Stewart has, by now, become Professor X for a generation. Halle Berry demanded a greater role this time around, and the fact that this has been forced into the script is obvious  at least to purists. Her Storm has a couple of good lines, but Halle goes overboard, delivering them with a super-crusader air that makes you wince. Famke Janssen is key, but isn't given anything to work with. Shawn Ashmore and Aaron Stanford do well as Iceman and Pyro  enough to consider another spinoff, maybe?

Kelsey Grammer (who plays psychologist Frasier Crane in the series Frasier) seemed perfectly cast as Beast  a gigantic blue 'furball' who balanced superhuman strength with articulation and brilliance. In The Last Stand, he's just a rather dry cobalt monkey. Too unfair (and I'm not just saying that cause Beast's my all-time fave). Oh, and Ellen Page just took the spirit out of Kitty Pryde. Anna Paquin was wasted as Rogue, but then I'm sure she'll turn up in the Wolverine film. But how on earth, Brett, could you not have used more of the stunning Rebecca Romijn? Don't you realise how important Mystique was to the first two films?

Don't get me wrong, the film is good timepass. Go to a theatre, get yourself a big Coke and a tub of popcorn, laugh through the film and enjoy the mega-fun of it all (By the way, the final scene is brilliant, and try and wait till after the credits for a pivotal referential surprise). But don't expect to take much back from this. Imagine, if you will, a spectacular face-off between Pyro and the Iceman: lots of fire, lots of ice. To paraphrase one of the best films ever, all you're left with is lukewarm water.

But forget all that. You have to have to have to watch X-Men: The Last Stand in theatres. You simply must. Because before the film begins, it opens with the theatrical trailer of Bryan Singer's Superman Returns, and while Marvel-fans are understandably heartbroken, that alone is ironically the best reason to recommend this film.