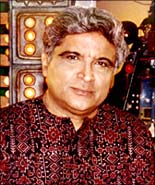 Akhtar was to be a part of a 20-member Bollywood delegation who were to attend a television channel's show in Pakistan in aid of earthquake victims.

"I don't know the reason why my visa was canceled," said a bemused Akhtar.

Among the many other members whose visas were accepted were Saif Ali Khan, Shabana Azmi and Urmila Matondkar.

"I was singled out and the best person to answer this question (why his visa was cancelled) would be the Pakistan foreign office," said Akhtar.

All other members of the delegation have decided to cancel their visit after this move, as they felt it was wrong for the Pakistan government to cancel Akhtar's visa, the writer, who has written classics like Sholay, said.

Asked if he was singled out because of his outspoken nature, Akhtar said, "I don't know. As I said, only Pakistan government can answer this question."

Actor Feroz Khan had invited the Pakistan government's ire in May due to reported anti-Pakistan remarks at a function held for the Pakistan premiere of his brother Akbar Khan's film Taj Mahal.