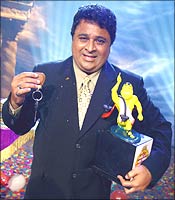 Pakistan's Rauf Lala has been voted by an Indian audience as the winner of Star One's popular comedy show, The Great Indian Laughter Challenge: Dwitiya. In a neck-to-neck contest, Lala beat Mumbai's Rajeev Nigam to become Numero Uno on the show that has been making audiences roll with laughter for 18 weeks.

The grand finale shot at a studio in Mumbai witnessed judges Navjot Singh Sidhu and Shekhar Suman, along with actress Bipasha Basu, crown the winner. Among other goodies, Rauf also bags a brand new Chevrolet Aveo as part of the winning deal.

Asked to comment on his victory, Lala -- who hails from Karachi and has been doing stage shows for more than two decades now  says, "When my name was announced, I thought I was dreaming. I still find it difficult to believe. I am sure everyone back home in Pakistan is proud and happy. I want to extend my gratitude and heartfelt thanks to Star One and the people of India for giving me the opportunity and this honour!"

Mumbai's Rajeev Nigam was the 1st runner-up, while Pratap Fauzdar from Agra and Khayali Saharan from Chandigarh shared the trophy for the 2nd runner-up position.

Lala's popularity was more than evident from what Nigam had to say about him: "We are extremely happy that Bade Bhaiyya (Lala) won the contest. We never had any doubts about his capabilities and knew he was the best and the most eligible. To be honest, I would have felt bad if it were anyone else."

The grand finale  a special 90-minute show -- will be telecast tonight at 10 pm on Star One.