Music direction isn't what it used to be. Hummable melodies have now been replaced by dancehall patterns and thumping beats tuned to discotheque mania.

Leading the new Bollywood sound brigade are Vishal Dadlani and Shekhar Ravjiani. Vishal-Shekhar are responsible for setting floors on fire with the superhit Dus soundtrack, and are stepping up to bat now with Salaam Namaste.

Raja Sen shot the breeze with the music composer duo, and tried to see how they work. Here are some excerpts:

Let's start by talking about the Salaam Namaste soundtrack.

Shekhar: 'Fresh' (laughs at the commonly used adjective). It's a very vibrant soundtrack.

Vishal: See, Dus (their recent smash hit) was a big club sound, but this is totally different.

So how do you guys develop a mood for a certain film's soundtrack? Is it your call or the directors?

Vishal: The music we make is the director's music, based on the story he wants to tell.

Shekhar: For example, for Salaam Namaste, Siddharth (Anand, the director) briefed us on the kind of music. This started with a story session, in minute detail.

Vishal: The music came based on the emotion he wanted to convey. We got the story, and then hung out together, started writing tunes.

Shekhar: The end result is quite different from what we have done before.

Is that a constraint for you, this need to constantly innovate? Do you get enough scope to be different in Hindi cinema?

Shekhar: This is a Yash Raj (Films) soundtrack, so we're expected to be melodic. The music is typically our sound, but there are a lot of strong melodies. Good directors know what they want.

Vishal: Adi (Aditya Chopra, the film's producer) knows music so well. These are directors who try and bring out the best melodies. Siddharth is great to work with.

Is the whole process of music-direction a very structured and clinical one, or do you guys just jam?

Vishal: We jam! There is structure, yes, but basically we all get together  the music directors, the director, and the producer. We play around with tunes and what our basic ideas are, and things obviously change. We get a lot of inputs, and a lot more to work with.

Shekhar: The thing is that music directors never work alone.

Vishal: Yeah, it's just a matter of how they choose to share the credit. There are music directors who work with a lot of people but don't name them.

But you two are a definitive partnership. How do things work with you? Are there clearly demarcated musical areas?

Vishal: Yes, I have the left side of the room, he has the right!

Shekhar: We pretty much do everything together. We're from different schools of music, we like different kinds of music, but we manage to have a good shared musical taste.

Vishal: The process, as you call it, is very free-flowing. I can write a song, and Shekhar can say it's really cheesy! We bounce each other's ideas.

Shekhar: And it's very important that we can both be objective and analyse the songs.

Vishal: True. Tunes need a definite quality control, and when both of us end up writing songs together, it feels great.

So how did you two meet?

Vishal: Well, we put on this rock show many years ago, with the basic intention of meeting women. I don't know, Shekhar might have participated because of some 'creative urge' (laughs) but I wanted to meet women!

Shekhar: We had a common friend, a drummer called Shiraz, and I must say (laughs) it really wasn't much of a 'rock show' eventually.

Vishal: But we did meet there, and hit it off. But then nothing else happened, and we fell out of touch.

Shekhar: I was working on jingles for Raj Kaushik (advertising filmmaker, director of Shaadi Ka Laddoo), and the soundtrack for the original Dus film, for the late Mukul Anand. But that film totally changed, and that music was never used.

Vishal: And Raj heard a couple of songs of mine, and he loved them.

Shelhar: So five years after the rock show, we both met in Raj Kaushal's studio to work on Pyaar Mein Kabhi Kabhi!

Vishal: It was a crazy coincidence! I walked into the studio, and I see this guy, and I do a double take! (Laughs) 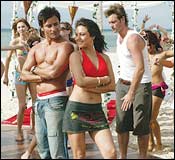 Vishal, you've been a rocker for quite some time with Pentagram. Are you still actively part of the band? Have your film responsibilities forced you to cut back on rock?

Vishal: No, actually. Nothing is in the other's way. My bandmates and Shekhar have both been really accommodating, and I've been able to juggle my schedules comfortably. It's pretty cool. I still rock as much as I ever did.

But what about music styles? You two worked separately, and did your own thing. Now you're smack bang in the middle of big bad Bollywood. How different is it?

Vishal: First of all, the horror stories you hear are 99% untrue. The industry treats you depending on the way you are.

Shekhar: Exactly. It's about how you respond to people. Maybe certain people just behave coolly based on how we are. So they're cool with us, and maybe  for all we know  different with the rest of the industry folk: It doesn't matter.

Vishal: Also, we're very informal. Instead of a traditional producer-music director or a director-music director relationship, we end up being friends. The jamming sessions are great fun, where we all hang out together.

Shekhar: Music direction is something we love, and are very passionate about. I guess we're cool in Bollywood because making music can never be our 'job'.

There's a lot of 'different' music being made these days, and a lot of purists aren't warming up to it. Do you think Bollywood is suddenly trying to be too radical, in every way?

Vishal: There's no such thing as too much experimentation.

Vishal: And all these new guys have their own set of influences, their own likes and dislikes, musically. Most of them are very hands-on about what they want. I think we're here at the right place, at the right time.

Shekhar: In the West, music is constantly evolving. There's always something new to do. We should be just like that.

What kind of experimentation thrills you guys musically?

Shekhar: We like to work with traditional sounds in a non-traditional manner.

Vishal: For example, the Dus bahaane song is basically a dholak loop, under a dancehall pattern. If you rip up the track and break it apart, that's what you'll discover -- which is something you can hardly make out when you listen to the track. And that's what makes the sound of the song so special.

Shekhar: The dholak gives it the groove.

Who have inspired you as music directors? And which of your contemporaries do work you think is admirable?

Shekhar: (Among the new guys) I like Shantanu Moitra's work.

Shekhar: And (A R) Rahman is totally brilliant. Sometimes you just have to be overwhelmed with certain things. Like the way he mixes the shehnai in the Swades theme. (They start 'singing' the instrumental bits) It's really awesome.

What kind of music do you like personally? Any favourite artistes?

Shekhar: In my car, I have the Bunty Aur Babli tape (laughs) because my daughter just loves it!

Vishal: She doesn't like the Salaam Namaste stuff as much, na?

Shekhar: No, not yet, but she's big on the television promo, and occasionally dances to the (sings) Salaam namaste, salaam namaste chorus.

Vishal: (Laughs) But it's not in the league of (sings) Bunty aur Babli, yet.

Shelhar: No. Anyway, about my music, I listen to a lot of old Hindi stuff. Lots of (Mohammed) Rafi, Mukesh sa'ab, Kishore Kumar. And then there's hip hop and Sufi music.