'Paheli is a simple, loveable film' 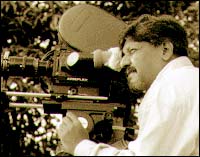 Think of Amol Palekar and you immediately visualise a Hrishikesh Mukherjee/Basu Bhattacharya world with Utpal Dutt and soothing music. But as Palekar keeps reminding you, he is an "actor by accident, producer by compulsion, but director by choice".

And it is as a director that he is making waves now, with his upcoming Paheli, which releases this Friday. The most 'indie' of independent filmmakers, this much-hyped production features Shah Rukh Khan (also the film's producer) and Rani Mukerji. And the Bollywood Badshah plays a ghost.

In a conversation with News Editor (Entertainment) Syed Firdaus Ashraf, Palekar talks about this unique film, why he isn't acting anymore, and expresses surprise that someone actually noticed him in Rakesh Mehra's Aks. Excerpts:

Why did you choose to make Paheli?

I make films because I want to tell a story. I am obsessed with storytelling. I want to share the experience of storytelling with as many people as possible. If I make a film like Anaahat (starring Sonali Bendre) in Marathi, it is because I genuinely feel it can be conveyed best in Marathi. When I made Ankahee (1985) with Deepti Naval, Vinod Mehra -- and a small 'star' called Amol Palekar -- I thought it could be made in Hindi because the subject needed that language. I allow the subject to make its own demand. All I do is be honest and sincere to those demands and give my best to that subject.

Most of your films are based on novels. Is there any particular reason for this? Are you trying to take a novel to a wider, mass audience using cinema as the medium?

You see, literature has its own strengths and has tremendous reach. Let us not have this condescending attitude that films have more reach than literature. Paheli is a great story, and is a great literary work. This is a folktale that has come from our soil. The story has been told for ages, and it is still not stale. It remains as fresh as ever inspite of the time gone by. That is the strength of the folktale.

Tell me what cinema can be as fresh as this story. Vijay Dan Detha reinterpreted and retold the story. I am re-retelling that story. I don't think there is any contradiction or 'wrong' in doing this. I am taking this lovely folktale and narrating this story to a maximum number of people. I am also taking it to a wider audience because I have superstars like Shah Rukh Khan, Rani Mukerji and Amitabh Bachchan.

At the music launch for the film, you were quite overwhelmed with emotion...

Yes, I got emotional. You have a dream, you visualise it and you start making it. The completion of it is always an emotional journey. You have managed to realise your dream exactly as you had seen it. You have managed to give a concrete root to your dream. It is a humbling experience. It makes me emotional and very humble. I am so grateful to my entire team because they made me realise this dream.

Were you confident approaching mainstream superstar Shah Rukh Khan with such an offbeat script?

I don't see why this question should come. I had a readymade script and it has a very challenging and wonderful role for Shah Rukh. I also have the necessary credentials as a director. I have proved myself; I have a certain stature in national and international cinema. With this background, I think I can go to any star and approach him. I went and told him that he is the only actor who can do justice to this character. I didn't go to him because he was a superstar, but I went only because he could do justice to this role. After Shah Rukh was convinced, he agreed to produce it too.

Outside of this film, which of Shah Rukh's performances did you personally like the most?

I always felt he is a great actor. In fact, I have always felt that Shah Rukh, as an actor, is underrated. He is always labelled as a star doing the same thing. I don't believe in that. I always thought he is a fine actor. I also think he has a complete command over his craft. In Swades, he had a fine, controlled performance. It was a beautiful performance. In Paheli, Shah Rukh reconfirmed my faith in him as an actor. It was a pleasure to shoot him in this film.

After Swades, even his critics called SRK a fine actor. What do you think his performance in Paheli will do for his reputation?

I really don't know why these kind of clichéd expectations can be put on anybody! When Shah Rukh and I came together to make this film, some people said, 'Oh! Amol Palekar has become corrupt and has come to mainstream cinema.' Others said, 'Oh! Shah Rukh has not won a National Award and therefore he is doing this film.' I just think we are two people with different sensibilities and the capability to create a different kind of magic. This is the simple belief with which we came together, and we have made a very loveable film.

It's a great achievement to finish a film's shooting in just 47 days with such a big starcast.

It was very exciting. It was very stressful, but nonetheless it was a happy experience. I make my films in one schedule. I made Anaahat in 18 days. This is the only way I make a film. With Shah Rukh's complete support behind me, I could do this film. He ensured all the dates of the stars and ensured that they would be there at required time.

How inspired were you by Mani Kaul's Duvidha, which is based on the same story?

I am not remaking Mani Kaul's film. I am dealing with Vijay Dan Detha's story and this story has so much strength and depth and so many layers to offer. I am retelling that story from my perspective as I have enjoyed the story. I read that story way back in 1984, and since then I have loved it and admired Vijay Dan Detha's work. Mani Kaul and I are distinctly different and therefore my film will be distinctively different. 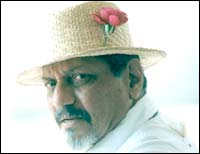 You haven't been seen acting since Aks...

(Interrupts) Did you see me there?

Many people didn't see me in Aks. Before they settled down into their seats, I was out of the screen. I did that film because of (scriptwriter) Kamlesh Pandey and (director) Rakesh Mehra. Kamlesh started his career as screenplay writer with my Ankahee. When he approached me I could not say no. I did that film for emotional reasons, knowing fully there was no role. I have not acted for the last 15 years and I don't miss it. It is as simple as that. It is a surprise to everybody but not to me.

In Khamosh, your performance really scared me. You never felt like doing that kind of a role?

That was one of the last roles I did as an actor. I am very happy and proud of that performance. I had done very similar kind of roles earlier. My performances in Bhoomika or in Tapan Sinha's Aadmi Aur Aurat were totally different. They were compelling performances, and those performances have given me different kind of satisfaction and pride. But that does not mean that I start acting (again).

Don't you regret people remember you more as an actor than a director?

You were a successful leading man even when Amitabh Bachchan was ruling the box office, and made a niche as an actor in those days. Why do you think we aren't seeing any new actor able to click independently?

You see, there are only two hits according to me this year, Black and Page 3, and both are not mainstream films. In your question only lies the answer. In those times we gave a wider choice to our audiences. When we gave Hrishikesh Mukherjee and Amol Palekar films audiences loved it. At the same time, they loved Manmohan Desai and Amitabh Bachchan's films too. Again, they also liked Dara Singh and Mumtaz films. The entire film scenario was rich at that time. Today we tell audiences, 'This is what you want and we are giving it to you.'

The audiences are therefore rejecting it. If you give them something different, people will like it. You see Satya and Lagaan were not mainstream films and they were huge hits. So it is for us to try and do something different other than the formula, which is failing and not clicking. We must ask this question to ourselves whether we need to re-assess our ideas and ask ourselves what audiences want in a film.

Are there any plans for an acting comeback?

No, not at all, unless there is some role that makes me excited all over again. I should feel nervous about whether I will be able to do the role. If that happens, only then will I do the role.

Did you and Shah Rukh Khan have creative differences on the sets?

Any two human beings who come together are bound to disagree. If I say there was no disagreement, it is a fallacy in itself. Both of us are coming from different backgrounds and different sensibilities and we have our own ways of expressing differently.

We come from different languages, different sociological background and if you put all these events together and see the overall picture, you will find out that we have made a simple loveable film. Did we reach there? Of course we reached there. If we had disagreed, we would have not been able to make the film in 47 days.