Britney's marriage on the rocks, again! 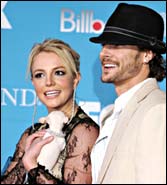 To save her marriage, the singer is also said to be seeking advice from mom Lynne, according to Britain's News of the World.

'Britney and Kevin spend most of their days apart. And for a couple who have only been married seven months, it's very odd behaviour for them to be sleeping in separate beds,' Femalefirst quoted a source as saying.

It was reported recently that Kevin had spent an evening with a 'VIP escort' at a Las Vegas nightclub, leading to a storm between the couple. Britney was also pictured without her wedding ring earlier this week.

However, she has denied all reports of her marriage being on the rocks and said, 'We're going to be together forever. We know that, and that's the only thing that matters.'