'Bride And Prejudice is not a K3G'

urinder Chadha, whose Bend It Like Beckham, was a rage in India and abroad, is ready with her new film, Bride And Prejudice.

Was it difficult breaking into Hollywood?

I guess breaking into commercial cinema was difficult because most of the people who decide whether your film deserves funding are men and they do not see things from a woman's perspective.

For me as a woman, the issues and sentiments that matter to me might not matter to the male financier.

It was tough to make Bhaji On The Beach and Bend It Like Beckham. But not Bride And Prejudice.

Let me add that putting together a movie project is hard enough for anyone -- man or woman.

Did you have the luxury of options after Bend It?

Yes. I did what my heart told me. I made a complete Hindi movie.

I grew up in a part of London where Hindi films were screened in three theatres. I loved watching all of them even in the 1970s when they got really bad.

I chose Pride And Prejudice because I feel 200 years ago, England was no different than Amritsar today. Believe me, the transposition did not offend the purists in England at all.

The news that I was making Bride And Prejudice was welcomed with broad grins by everyone because it's such a cheeky thing to do. 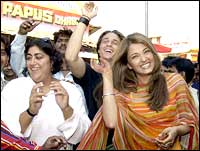 I was invited by the Jane Austen Society in England and America to apprise them of my plans. They were delighted that Jane Austen was being kept alive. Simon Langton's recent adaptation of Pride And Prejudice was stunning. I hope I have done justice to it. They had six hours while I had only two, including seven songs.

I will release the full version with songs everywhere.

How would you define Bride And Prejudice?

It is a British film made by British finance, obviously because I am British.

But it is a homage to Hindi cinema and to Hollywood musicals. My friends in the West, who have seen it, have compared it to Grease. They don't know the musical references from Hindi films. There are very deliberate references to the cinema of Manoj Kumar, Raj Kapoor, Yash Chopra and Karan Johar.

Do you see yourself as an outsider in India?

I am English. When I speak in Punjabi, I seem very Indian.

But yes, in India, I am seen as an outsider who has an interesting take on their world. Bride And Prejudice is not a Hindi film in the true sense. That rickshawallah in the front row in Patna is going to say, 'Yeh kya hua? Aishwarya ko kya kiya?' [What did you do to Aishwarya?]

Of course, they will all go and see it for Aishwarya and the songs. And because Bend It was released in Hindi with what I thought was a witty title -- Football-Shootball Hai Rabba. I wasn't around when they dubbed it in Hindi. I was quite amused when I saw the Hindi version. It was not my script. They had cut out all the gay references (laughs).

Now, in France, they're planning to make a French version of Bend It.

What do you think of the other Indian women filmmakers who operate from abroad like Deepa Mehta and Mira Nair?

Are you mad? You think I am going to tell you! (laughs)

No seriously, there is a world of difference. Deepa and Mira went to school in India. They are both Delhi girls. That shows up in interesting ways in their work.

On the other hand, I went to school in Southall. I have been in England all my life. My links with India were through Hindi movies in the local theatres. I see myself as British-Punjabi. It works for me. I have a different relationship with the West. I never see myself as an outsider in the West.

But the same Punjabi energy ran through Mira Nair's Monsoon Wedding and your Bend It!

Yeah, that's true! Maybe that had to do with the narrative mood rather than our cultural backgrounds.

Bend It, Bride And Prejudice might be over-sold to the public?

I don't think so. I know audiences will go to the theatres with a lot of expectations. But they will enjoy it.

I don't think it will be a huge 100-week 'House Full' film in India because it's in English.

It's not a Kabhi Khushi Kabhie Gham.

It's not a full-on mega-star bonanza. That is what Karan Johar does. Those are the movies that go whoosh, and that's great.

I'm not sure if Bride And Prejudice will be liked by hardcore audiences. There will be a Hindi version for India. This time, I will be more involved with the dialogues than I was with Bend It. Anoop Singh is doing the Hindi translation for me. He's quite a poet.

As for the rest of the world, I think it will do very well! (laughs)

It will be released in India and the UK on October 8, and over Christmas in the US.

What I hope to do with Bride And Prejudice is make the Hindi language familiar to the world. After all, Bollywood is much bigger than Hollywood. Hopefully, it will work both ways. It will spur Westerners to watch more Hindi movies and also inspire Bollywood filmmakers towards better narratives.