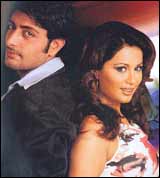 Have you ever wondered how the latest Hindi film makes its way into your home?

It is a question that has always intrigued me. How do such closely guarded prints reach Indian and Pakistani homes?

In India, the business is done covertly. But in Pakistan, stores brandish huge posters announcing the release of the latest Hindi films on VCD and DVD the day they open in India. Sometimes they are available on VCD and DVD even before they make it to the marquee in India, at the cost of a mere 50 Pakistani rupees.

I visited one such store in Multan and was surprised to find hundreds of VCDs of the latest Indian releases Hawas, Muskaan and Woh.

In the late 1980s the store owner's father bought 500 VCRs, which made copies of the latest Bollywood movies.

Today, his son sells close to 1,000 VCDs a day. But he is a small fish in an ocean of film piracy.

The kingpin of the business is Pakistani who migrated to Dubai and now owns a company that sells the latest Hindi films illegally across the world, including in India.

The pirate once sat outside VCD shops in Karachi and asked customers if they wanted to check the quality of the print of the film they had bought for a rupee. Today, those in the know say his worth can't be calculated on a calculator.

Hindi films are released simultaneously in India and Dubai. A copy of the print is made in Dubai and sent to Karachi. In Karachi, 50,000 copies of the film are made in a couple of days before the well-oiled distribution network takes over. Prints are sent to India, which eventually find their way into our homes.

Every attempt to stop piracy has failed. One respected filmmaker refused to release his film in Dubai, fearing piracy. But that did not stop the video mafia from making prints of the film, starring Aishwarya Rai and Shah Rukh Khan.

One of their contacts in South Africa was asked to make a copy of the film in his country and send it to India the same night. Within hours, copies of the film were available in India. A copy was apparently sent to the filmmaker's home with words best left unsaid written on it. 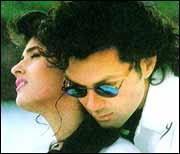 Prints of Bobby Deol's debut Barsaat were supposed to be the best guarded in the film industry. Security guards accompanied the prints everywhere they went.

But a camera print was available less than two days after the film released. The amusing part was that while the print was being recorded, a fly sat on the lens with the 'cameraman' trying hard to shoo it away with a thin stick!

There is no law that prohibits video piracy in Pakistan for Hindi films. In fact, the VCDs have sponsors who pay huge amounts of money -- several lakhs, we hear -- to sponsor the film.

There are around 14 distributors who sell the VCDS to smaller stores in Pakistan.

Rushdie once complained about 'too much security'

Aaditya hits the road to salvage Sena after rebellion