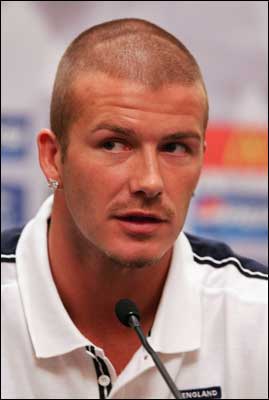 Beckham, one of the world's most famous and Britain's richest sportsman, earned more than £20 million last year, said The Mirror.

'Goldenballs', as Beckham has been nicknamed, took home a salary of £7.9 million from May to December 2003. His earnings from playing football (£5 million) and from the huge advertising and endorsement deals that he has under his belt, made up for the rest of his income.

Footwork Productions, however, was quiet on how much tax does Beckham pay.

The star footballer's wealth has been pegged at £65 million by the Sunday Times.

But Beckham is not making money for himself alone. He is said to have boosted the income of Real Madrid, the club he singed up for after his Manchester United stint, by £215million. Real Madrid's income was £220 million in 2002 but grew to £435 million last year, a feat that has been attributed to Beckham's golden touch.

'Terrorists are today being tracked and neutralised'

Coronavirus death toll in China climbs to over 1860

'This is andha kanoon of Yogi govt'

MAPPED: The global spread of coronavirus

154 eminent citizens write to Prez in favour of CAA

Fundamental right to protest, but: SC on Shaheen Bagh