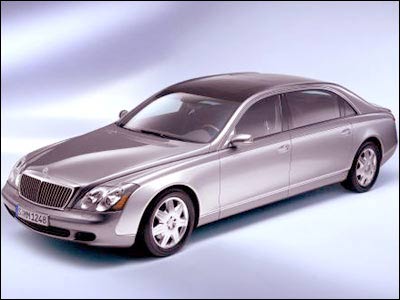 Reliance Industries, chairman, Mukesh Ambani is the only other Indian to own the luxurious saloon. Ambani bought his saloon from London, before Maybach's India operations commenced.

Driving the Rs 5.5-crore Maybach!
Most expensive cars of India

The keys of the nayarit silver- and mid grey-coloured super luxury saloon was handed over to Dhariwal by DaimlerChrysler managing director Hans-Michael Huber at the company's Pune plant.

Luring Indian customers with deep pockets, Maybach, made a debut in India early this year.

Earlier, the luxury carmaker had said it would sell 7-8 units of Maybach annually.

The car will be produced on orders and it normally takes six months to deliver a Maybach.

With Maybach's launch in India, its German-US manufacturer DaimlerChrysler has received a number of queries about the car.

Not to be outdone, Bentley has lined up Arnage R and Continental GT, which will cost Rs 3 crore (Rs 30 million) and Rs 1.6 crore (Rs 16 million) respectively.

In a move, which shows the depth and maturity of the Indian auto market, BMW is also toying with the idea to charm buyers with super luxury saloon 7-Series.

The super luxury sedan will be imported as completely built units.

Source: PTI© Copyright 2023 PTI. All rights reserved. Republication or redistribution of PTI content, including by framing or similar means, is expressly prohibited without the prior written consent.
Print this article

Plea in SC seeks ban on parties with religious names

14 charred to death in fire at Jharkhand building

SC to hear plea on electoral bonds in March