Smartphones! They can do anything 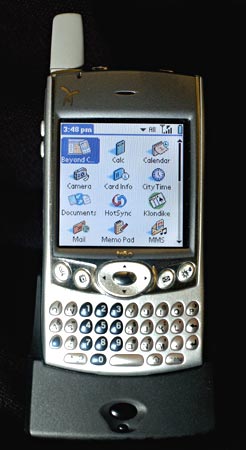 If a PDA and a mobile phone met, fell in love and went forth to multiply, the result of their union would be a smartphone.

For the uninitiated, the smartphone is the perfect combination of PDA and mobile phone. These new phones will make your modest mobile look like one of the more rudimentary hunting tools used by Neolithic cavemen.

What do smartphones do? The answer is just about everything short of the foxtrot. Features can include access to the Internet and e-mail, a built-in video camera, games, a video and music player.

In fact, the Cellular Telecommunications and Internet Association conference held in Atlanta, Georgia, in March had a lengthy discussion on how television facilities could be added to smartphones.

One of the more popular models is the Nokia 6600, relatively cheap at around Rs 19,500, which has a video recorder, and on which you can conduct conferences and check e-mail.

Then there's the ultra-new Sony Ericsson P910, which is selling especially well despite its whopping Rs 38,500 price tag.

This comes with BlueTooth -- technology that allows electronic equipment to make connections without wires -- which means that you will be able to synchronise all the data on your phone with your PC.

The P910 can also not only record images but also edit them. Then there's the MP3 player, a mighty force when combined with the 32MB memory stick. In case this isn't enough, the P910's Symbian Operating System means that you can download and run any program you need that the system does not come with.

Then of course there's latest Blackberry, the 7100v, which, along with the usual e-mail, BlueTooth and Microsoft Office attachments, also comes with a keyboard, a 35,000-word dictionary and a language processing system which works out what you're typing. This is better and much less frustrating than the T9 predictive mode of laborious texting most present-day mobiles use.

Given the popularity of the PalmOne (formerly Handspring) Treo series in India, (the 7100v is very similar in form to the Treo 600), and the competitive price of $200 (around Rs 9,200, whereas the Treo 600 is priced at a cool Rs 42,000), the 7100v should be popular if all goes well with the Blackberry launch planned here later this year.

However, despite their attractive features, smartphones are taking their time to infiltrate the mass market. According to a survey by In-Stat / MDR, a hi-tech market research firm, only 9 per cent of mobile users in the US have smartphones. And this trend extends to India, where the high cost of these phones mean they are used only by the very affluent.

Most smartphones available here cost anywhere between Rs 25,000 to Rs 45,000 and, inevitably, they are bought by "top executives or rich businessmen". Also, the phones are more expensive here because of distributors' margins.

As a result, most smartphone users pick up their instruments from abroad. After all, Singapore is just around the corner.

And as for those of us who can't afford to pop down to the Far East for the weekend, it's easiest to bypass the legitimate market altogether and go to a friendly neighbourhood dealer in Palika Bazaar, Nehru Place or Karol Bagh.

However, it may not be just the forbidding price that restricts the appeal of these phones. A survey in the UK last year showed that a large majority of smartphone users don't know how many features on their phone work.

The BBC reported that almost 30 per cent didn't know how to download new programs on their phones, and around 20 per cent wanted to receive e-mail and back up the information on their phone to a PC, but had no idea how to do so. (Are our phones becoming smarter than we are?)

This is backed up by users here as well: figures show that most people are buying these new phones for their MP3 players and Internet browsing.

"I love my phone but I really don't have time to find out exactly how it works, especially since I can just use my laptop at home or at work for business. The phone is more of a showpiece", says Ajay Kavlekar, a self-employed businessman.

To be fair, though, unless you're a business user, it will be hard to fully utilise your smartphone , given the astonishing array of features listed above -- you would have to simultaneously schedule, synchronise, e-mail, browse, and make a home video, all the while listening to the soothing sounds coming from the in-house MP3 player.

Also, in order to do all of the above, you would have to wade through the instructions manual which will probably read like a particularly garbled translation of War and Peace.

It's not clear how much of a market there is for smartphones in India. Currently, there are already about one million GPRS-enabled phones here, but less than 2 lakh (Rs 200,000) GPRS customers (only AirTel and Hutch provide GPRS).

However, companies believe that the market will grow and trends illustrate this as well-- new models are being introduced (there are five or six expected over the next several months), sales are rocketing, and data transfer is becoming more efficient with the launch of EDGE (Enhanced Data Rate for Global Evolution) by services like AirTel.

It seems that these phones are here to stay and will soon become an indispensable part of our modern, smarter lifestyle. -- Business Standard