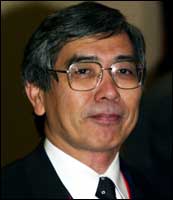 Haruhiko Kuroda, Japan's former vice-minister of finance for international affairs, has been unanimously elected president of the Asian Development Bank by its Board of Governors.

Kuroda, 60, will take over as ADB president in February 2005 from the present ADB president Tadao Chino, who announced his resignation in August.

"It is a great honour to be elected president of ADB. I am determined that the Bank should remain flexible in its approach to the many challenges facing its developing member countries. ADB must also continue to strive for greater effectiveness in its operations," Kuroda said in a statement.

Kuroda is at present special advisor to the Cabinet of Japan's Prime Minister Junichiro Koizumi and professor at the Graduate School of Economics at Hitotsubashi University, Tokyo.

In a career spanning nearly four decades, Kuroda has represented Japan's ministry of finance at a number of international monetary conferences as vice-minister of finance for international affairs.

During his terms as director-general of the International Bureau and as vice-minister between 1997 and 2003, Kuroda helped to design and implement the $30 billion Miyazawa Initiative - Japan's response to Asian economies hit by the 1997-1998 financial crisis.

Under his leadership, Japan helped Asian nations establish a network of currency swap agreements under the Chiang Mai Initiative, to avert another crisis.

Born in 1944, Kuroda holds a BA in Law from University of Tokyo and a Master of Philosophy in Economics from University of Oxford.
Source: PTI© Copyright 2022 PTI. All rights reserved. Republication or redistribution of PTI content, including by framing or similar means, is expressly prohibited without the prior written consent.
Print this article