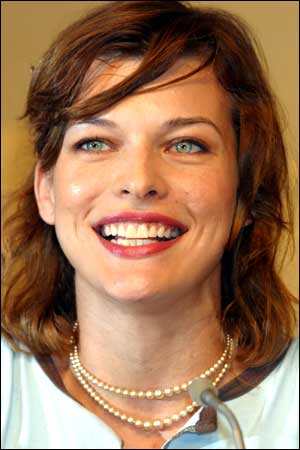 The Forbes magazine has named Milla Jovovich as the highest paid model of the world. She topped the list with a gross earning of $10.5 million.

Milla's major advertising contracts include the one with cosmetics giant L'Oréal since 1998. She is also an actress with several Hollywood films under her belt. A lot of her earning comes from films too.

Second in the Forbes richest models list is Brazilian Gisele Bundchen with annual earnings of $10 million, a contract with lingerie line Victoria's Secret that will earn her $30 million in four years.

German supermodel Heidi Klum, who makes approximately $8 million-a-year, is at number 3 in the list.

Milla Jovovich at press conference for the promotion of her movie BioHAZARD in Tokyo. Photo: Junko Kimura/Getty Images

© Copyright 2020 Reuters Limited. All rights reserved. Republication or redistribution of Reuters content, including by framing or similar means, is expressly prohibited without the prior written consent of Reuters. Reuters shall not be liable for any errors or delays in the content, or for any actions taken in reliance thereon.
SHARE THIS STORY
Print this article