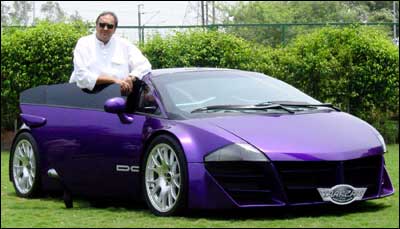 The dream car costs a whooping Rs 2 crore (Rs 20 million). The car is the hero on four wheels and can swim, fly, cross fires and fight villains as well. The movie revolves around Raj (Vatsal Sheth), a mechanical genius who designs a fantasy car that becomes the envy of the whole country. Reminded of Knight Rider? Ah well!

Chhabria's violet hotwheels modelled on a Toyota MR2 took eight months to produce. He said he aimed for a bold clientele for his car who could identify with the colour. The soon-to-be released film was directed by Abbas-Mustan.

Chhabria also said his firm DC Design will come out with an initial public offer in the next three years.