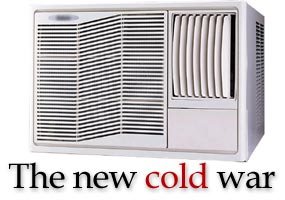 Will they be chart-busting winners as air-conditioning giant Voltas insists? Or will they be duds that generate more heat than any refreshingly cool air?

For Voltas, which has been knocked off the top slot in the brutally competitive air-conditioning business, there's no question that its new cut rate product has been a runaway hit.

Its rivals are scoffing, but the company says its dealers are calling in frantically for more supplies and that first-year sales are likely to cross the 20,000 mark originally targeted by the company. "In fact, the demand is quite unprecedented," says K J Jawa, vice president, operations, Voltas.

Can Voltas grab the high ground in the fiercely competitive air-conditioner market? As the mercury rises, so is the marketing blitz in the fast-growing business.

After a slow year in 2003 when a cool summer wrecked its plans for icy cool profits, the industry is once again hoping for 25 per cent growth. That would be a repeat performance of what happened in 2002-03 and it would push sales up from 800,000 in 2003-04 to around the 1 million mark.

This time round it will be even tougher than before. More than half-a-dozen powerful companies are battling it out in the air-conditioning market. Leading the way is Korean giant LG, which has stormed to the top and grabbed over 29 per cent of the market.

In second position is Voltas, which was once the market leader and which now has only 11 per cent. Voltas says its new cheaper models combined with an early start to the summer have already pushed its sales up 35 per cent.

But Voltas is ploughing a lone furrow as it attempts to bring air-conditioner prices below the magic Rs 10,000 mark. Its rivals are focusing on better features -- including everything from remote controls to air-conditioners that offer 'purer air' when they are switched on.

Whisen, one of LG's top-of-the-line models, for instance, allows homeowners to call a pre-arranged number on their phones that will automatically switch on the cooling mechanism. LG says it has already cashed in on the early summer and sold 115,000 air-conditioners in the first quarter of 2004.

Inevitably, everyone is watching with hawk-eyed attention as Voltas pushes ahead with its ambitious experiment. But they clearly expect it to come to grief.

In fact, most people in the industry dismiss the new Voltas models as 'gimmicks'. "These air-conditioners may work in the United States and European markets but not in India," says Godrej & Boyce executive vice-president S K Ghatak.

Voltas counters by pointing out that in large swathes of India, the temperature does not touch 42 degree Celsius. "We are looking at very specific markets," says Jawa, "like the coastal belt, where coolers are useless and which anyway accounts for 70 per cent of Voltas' AC business, and in niche markets like in smaller flats across the emerging townships."

So LG is trying its own long-range strategy to bring down power consumption and thus win customers. The company is toying with the idea of selling a stripped-down one tonne model for around Rs 10,000. More importantly, it recently launched the dual compressor 1.5 tonne model.

The model has a 1 tonne compressor and another 0.5 tonne compressor. This, according to the company, brings down electricity consumption dramatically. "This can lead to power savings to the tune of 40 per cent," says Salil Kapoor, head, room air conditioners, LG.

Even Voltas knows that electricity consumption is more important than any other feature in the customer's mind. It says that the 0.6 tonne air-conditioner will add only Rs 500 to the monthly electricity bill if run every night. Similarly, the 0.8 tonne, which sells for Rs 11,500, will operate for Rs 800 a month if used at night.

Voltas has great hopes for its products. Some time ago, the company commissioned business strategist Rama Bijapurkar to study the market and she concluded that if monthly bills for air-conditioners could be brought to less than Rs 1,000 the overall market would triple to 3 million annually.

She isn't the only one to come up with rosy projections. In a similar vein, consultant Francis Kanoi predicts that if entry-level prices can be brought below Rs 15,000 the market will grow to 3 million. And consultancy firm McKinsey has given an even more bullish prediction, saying the market could grow to 6 million with a similar entry-level price tag.

Voltas' Jawa believes the industry badly needs dose of innovative thinking. Since 1988, while incomes have been rising, AC prices have consistently fallen. Despite that, the industry's penetration is abysmal and the market is one-eighth that of China.

But the air-conditioning manufacturers are determined to change that picture. LG now has 29 room air-conditioners ranging from top-of-the-line split models -- which constitute 20 per cent of the market -- to the cheaper ones which sell for about Rs 17,500.

But they have a problem this year: despite the cutthroat competition and the desperate attempts to lure customers, they've been forced to hike prices. That's because steel prices have risen by more than 10 per cent.

Nevertheless, the companies are ploughing ahead with their efforts to attract attention in the marketplace by throwing in newer features. Several companies are, for instance, offering different types of air purifiers as an add on.

Take Electrolux Kelvinator which has its Oxygen range of air-conditioners. Electrolux claims the product can break down stale air and freshen it using a three-stage filtration process.

Similarly, Samsung has launched the Hurricane series of window ACs which employ a three-stage filtering system with a silver coating on the final stage that neutralises fungi and bacteria. And LG, in a similar category, has the Plasma Oxy range.

Even the companies with a smaller share of the market are getting ready for a big push this year. Whirlpool, for instance, hopes to up its market share from 5 per cent to 7.5 per cent. Whirlpool's vice-president, marketing, Arvind Mediratta says the company doesn't plan to enter the super-cheap segment.

But for the moment all eyes are on whether the Voltas experiment works. The company has spruced up its distribution network and its products are now available in 1,100 retailers as compared to 700 last year.

Besides that there will be 16 Voltas one-stop-shops, where the company will sell refrigerators and air-conditioners. Also, the company has boosted its ad budget to around Rs 17 crore (Rs 170 million). Out of that about Rs 12 crore (Rs 120 million) will be spent in the next three or four months to ensure that the cheaper models get off to a flying start.

Does Voltas have the right answers to prise open the market? LG insists that air-conditioners haven't been able to sell in the rural areas. Therefore, it feels the answer is to have more dealers in the rural areas who can take care of problems like servicing.

Can the air-conditioning industry catch up with televisions and refrigerators? About 9 million televisions were sold last year and that's expected to grow by 20 per cent this year.

Similarly, industry analysts say between 4 million and 4.5 million refrigerators will be sold this year. Whatever happens, there will be a red-hot battle in the marketplace.